Tanzania is a country in East Africa. The official languages are Kiswahili and English. It is next to Africa's biggest lake, Lake Victoria.

In 2017, there were about 54,000,000 people living in Tanzania. They are divided into 120 tribes; none have more than 10% of the population. Tanzania is a multicultural society. There are many languages & religions in Tanzania; the main ones being Christianity and Arabic.

The president of the United Republic of Tanzania is John Magufuli. Tanzania is a member of the United Nations, UNIDO, the World Bank, the International Monetary Fund, the Commonwealth of Nations, the Non-Aligned Movement, SADC, PTA, and the ADB. It is also signatory to the Lome Convention.

Mainland Tanzania (formerly Tanganyika) received independence in December 1961, while Zanzibar gained her independence in January 1964, through a revolution. The two countries joined together to form the United Republic of Tanzania in April 1964. Until July 1992, Tanzania was a one-party state. Following a Presidential Commission, the country has started a multi-party political system. It has held successful general elections in 1995 and 2000. " 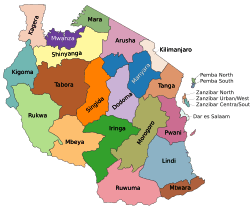 Tanzania is divided into 26 Regions. 21 are on the mainland and five in Zanzibar.

All content from Kiddle encyclopedia articles (including the article images and facts) can be freely used under Attribution-ShareAlike license, unless stated otherwise. Cite this article:
Tanzania Facts for Kids. Kiddle Encyclopedia.