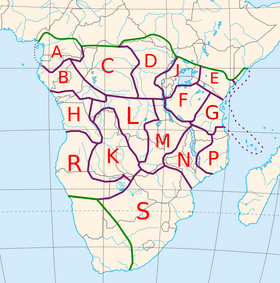 The approximate locations of the sixteen Guthrie Bantu zones, including the addition of a zone J

The Bantu languages came from the region of eastern Nigeria or Cameroon. About 2000 years ago the Bantu people spread southwards and eastwards, introducing agriculture and iron working and colonizing much of the continent.

Some words from various Bantu languages have been borrowed into western languages. These include:

All content from Kiddle encyclopedia articles (including the article images and facts) can be freely used under Attribution-ShareAlike license, unless stated otherwise. Cite this article:
Bantu languages Facts for Kids. Kiddle Encyclopedia.