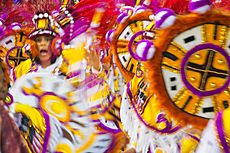 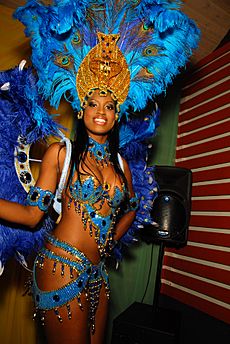 Samba is a kind of music, dancing, and singing, originally from Brazil. It began as a music/dance movement in the 1920s.

The dance of brazil.

Samba is a lively, rhythmical dance of Brazilian origin in 2/4 time. In ballroom dance there are three steps to every bar, making the samba feel something like a 3/4 timed dance. The timing is one, a-two, with the values about one beat, 1/4 beat, 3/4 beat.

There are two main types of samba that differ from each other: the modern ballroom samba, and the traditional samba of Brazil. Traditional Brazilian samba includes the samba which is danced solo at Carnival. In that case, the dancers take just one step on each beat.

The ballroom samba has its origins in Brazil at the beginning of the 20th century. Many steps can be traced back to the Maxixe danced in 1910s. A book published in France in 1928 already described how to perform the samba. The modern ballroom dance was created in England, mostly with steps adapted from those seen in Brazil. This version is now danced all over the world in international competitive dancing as regulated by the World Dance Council.

Ballroom samba, like other ballroom dances, is a form adapted for its suitability as a partner dance. The dance movements, which do not change depending on the style of samba music being played, borrows some movements from Afro-Brazilian traditional dances such those used in candomblé rituals.

The ballroom samba is danced to music in 2/4 time. The basic movements are counted either 1-2 or 1-a-2, and are danced with a slight bouncing action. This action is created through the bending and straightening of the knees, with bending occurring on the beats of 1 and 2, and the straightening occurring on the "a". Samba is notable for its constantly changing rhythms however, with cross-rhythms being a common feature. Thus, common step values (in beats are):

The following applies to the type of samba done during street carnivals where the musicians will move along with the dancers, sometimes on foot, sometimes on a motorized 'float' or platform.

The music is played with different instruments – bass drums (a surdo drum, used for keeping a steady beat), snare drums, a whistle (called an apito [a-peet-oh], used for beginning and ending sections of music), other types of untuned percussion, and different varieties of bells.

Other sections are when the apito blasts one rhythm, and all other instruments respond using another rhythm (that lasts the same amount of time as the first), named a call and response section; and a Samba piece can have instrument solos, when one instrument is playing an exciting rhythm. The apito caller signals the end of one section and the beginning of the next by blasting a short call. Pieces always have clear beginnings and ends.

All content from Kiddle encyclopedia articles (including the article images and facts) can be freely used under Attribution-ShareAlike license, unless stated otherwise. Cite this article:
Samba Facts for Kids. Kiddle Encyclopedia.