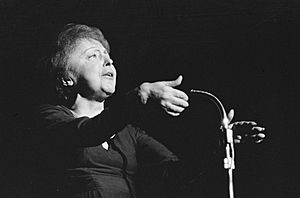 Édith Piaf singing in front of a microphone (1962).

Singing is the act of producing musical sounds with the voice and augments regular speech by the use of sustained tonality, rhythm, and a variety of vocal techniques. A person who sings is called a singer or vocalist (in jazz and popular music). Singers perform music (arias, recitatives, songs, etc.) that can be sung with or without accompaniment by musical instruments. Singing is often done in an ensemble of musicians, such as a choir of singers or a band of instrumentalists. Singers may perform as soloists or accompanied by anything from a single instrument (as in art song or some jazz styles) up to a symphony orchestra or big band. Different singing styles include art music such as opera and Chinese opera, Indian music and religious music styles such as gospel, traditional music styles, world music, jazz, blues, ghazal and popular music styles such as pop, rock, electronic dance music and filmi (Indian film songs).

Singing can be formal or informal, arranged or improvised. It may be done as a form of religious devotion, as a hobby, as a source of pleasure, comfort or ritual, as part of music education or as a profession. Excellence in singing requires time, dedication, instruction and regular practice. If practice is done on a regular basis then the sounds can become more clear and strong. Professional singers usually build their careers around one specific musical genre, such as classical or rock, although there are singers with crossover success (singing in more than one genre). Professional singers usually take voice training provided by voice teachers or vocal coaches throughout their careers. 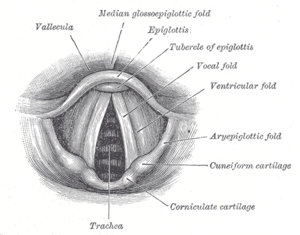 A labeled anatomical diagram of the vocal folds or cords 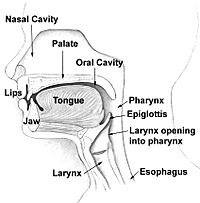 When people sing they use the air in the lungs. The pressure with that the air comes out of the lungs can be controlled with several respiratory muscles, including the muscle called the diaphragm which goes across the front of the body below the ribs. People who have singing lessons spend a lot of time practising “breath control”.

The air comes through the throat where the larynx is like a reed on a clarinet: it vibrates, controlling the passage of air, and this makes the note higher or lower depending on how it is controlled.

The sound comes into the mouth which is space where the sound can be made bigger (it “resonates”). Professional singers even learn to think of the whole head as a resonator. They sometimes talk about the “mask”, i.e. they imagine a mask in front of the face and this makes the sound bigger. The sound then comes out of the mouth so that it can be heard.

Singing is different from speaking because of the special way the vocal cords in the throat are used.

Most people can sing notes which cover more than an octave. People who sing a lot will probably be able to sing over two octaves. Singers can be called according to whether they have higher or lower voices: soprano, mezzo-soprano and contralto for women, tenor, baritone or bass for men. Some men are able to train their voices to sing alto by using a falsetto voice. Children’s voices are often called treble.

There are lots of different singing styles in the world. Each one has a different technique. In Western classical music singers learn to sing in a bel canto voice which uses lots of resonance in the head and makes a smooth sound. Bel canto was used in Italian opera. Later, in the 19th century, Richard Wagner wrote operas in which the singers needed to be more dramatic. Opera singers today can have different kinds of voices: bel canto, lyrical, dramatic, coloratura (extremely high and light) etc.

In church choirs the singers are often trained to use a lot of head voice because this sounds beautiful in large cathedrals.

Pop singers generally have a different technique: their singing is more from the throat. They do not need to develop powerful voices like opera singers because they sing into microphones so that their voices are electronically amplified (made louder).

Voices singing music from different parts of the world may sound very different. Chinese singing sounds nasal (through the nose). In Mongolia there is a technique of overtone singing which sounds rather like a finger being rubbed against the rim of a wineglass. In Switzerland men often yodel.

Rap is a kind of singing in which the rhythm is the most important thing. The pitch is high and low, but not to any particular notes. Scat singing is rather like rap.

Acappella singing is vocal music specifically without instrumental accompaniment. The name is from Latin a (without) and cappella (musical accompaniment).

Cantata is a term that exclusively refers to accompanied singing, which is the exact opposite of Acappella. 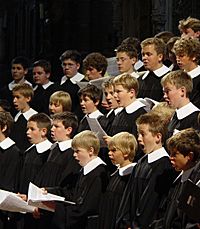 Singing is something that can be enjoyed by everybody. A group of people singing together is often called a choir. People can sing in choirs or smaller groups or on their own (solos). People can sing for their own enjoyment (e.g. in the shower), or they can practise hard and sing in concerts to an audience.

Singing can be done alone ("a cappella") or it can be "accompanied" (usually with musical instruments).

Some people say they are “tone-deaf”, meaning that they cannot sing in tune. But almost everybody can learn to sing if they try hard enough.

All content from Kiddle encyclopedia articles (including the article images and facts) can be freely used under Attribution-ShareAlike license, unless stated otherwise. Cite this article:
Singing Facts for Kids. Kiddle Encyclopedia.