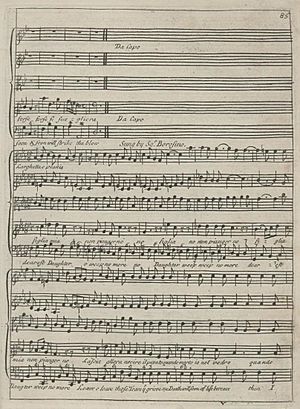 An aria is a long song accompanying a solo voice. An aria is usually in an opera. It is an Italian word of the 18th century meaning “air” (i.e. a tune). A small amount of text is used in an aria. Characteristics include the use of melismas, repetition and sequences. Typically there would be full accompaniment to the solo voice in the aria although this is not the case in Purcell's Dido and Aeneas where the majority of its arias are only accompanied by the continuo part.

In operas of the Baroque period most of the music was either “recitative” or “aria”. Recitative (from a word meaning: “to recite” i.e. “to tell”) was sung quickly, almost as if it were being spoken. The singer was accompanied just by a few supporting chords, usually on a harpsichord. The story was being told in the recitative. Once the situation in the story had changed there would be an aria. The singer would sing a song which expressed his or her feelings. The aria had more musical interest than the recitative. Arias were usually in what we call “ABA” form or “Da Capo” form. There was a main section, then a middle part, then the main section was repeated (“Da Capo” means: “back to the beginning”). In the Da Capo section the singer usually improvised, adding many embellishments and ornaments. The aria gave performers the opportunity to show off their virtuosity.

The word “aria” is not just used in opera. Arias can be found in cantatas or just by themselves. Sometimes pieces for instruments are called “aria”. These are often a tune with variations, such as Handel's famous "Air with Variations" for harpsichord, also known as The Harmonious Blacksmith.

In the 19th century the difference between recitative and aria in opera started to disappear. Composers like Richard Wagner made the music much more continuous. He did not want audiences clapping in the middle of his operas. He wanted the music to develop dramatically and continuously.

All content from Kiddle encyclopedia articles (including the article images and facts) can be freely used under Attribution-ShareAlike license, unless stated otherwise. Cite this article:
Aria Facts for Kids. Kiddle Encyclopedia.