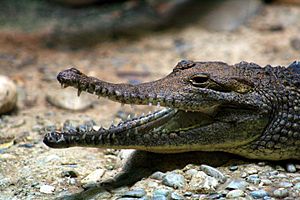 A freshwater crocodile at Basel Zoo in Switzerland

For the geographical meaning of mouth see River

The mouth is an opening in the face is the first part of the alimentary canal (digestive system). It is the place where the chewing of food occurs. The mouth has teeth to help chew the food.

In addition to its primary role as the beginning of the digestive system, in humans the mouth also plays a significant role in communication. The tongue, lips, and jaw, which are parts of the mouth, are needed to produce the range of sounds included in human language. People also kiss and show their emotions with the mouth. 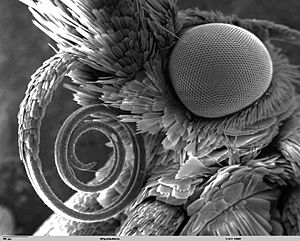 Apart from sponges and placozoans, almost all animals have an internal gut cavity which is lined with gastrodermal cells. In less advanced invertebrates such as the sea anemone, the mouth also acts as an anus. Circular muscles around the mouth are able to relax or contract in order to open or close it. A fringe of tentacles thrusts food into the cavity and it can gape widely enough to accommodate large prey items. Food passes first into a pharynx and digestion occurs extracellularly in the gastrovascular cavity. Annelids have simple tube-like gets and the possession of an anus allows them to separate the digestion of their foodstuffs from the absorption of the nutrients. Many molluscs have a radula which is used to scrape microscopic particles off surfaces. In invertebrates with hard exoskeletons, various mouthparts may be involved in feeding behaviour. Insects have a range of mouthparts suited to their mode of feeding. These include mandibles, maxillae and labium and can be modified into suitable appendages for chewing, cutting, piercing, sponging and sucking. Decapods have six pairs of mouth appendages, one pair of mandibles, two pairs of maxillae and three of maxillipeds. Sea urchins have a set of five sharp calcareous plates which are used as jaws and are known as Aristotle's lantern.

In vertebrates, the first part of the digestive system is the buccal cavity, commonly known as the mouth. The buccal cavity of a fish is separated from the opercular cavity by the gills. Water flows in through the mouth, passes over the gills and exits via the operculum or gill slits. Nearly all fish have jaws and may seize food with them but most feed by opening their jaws, expanding their pharynx and sucking in food items. The food may be held or chewed by teeth located in the jaws, on the roof of the mouth, on the pharynx or on the gill arches. 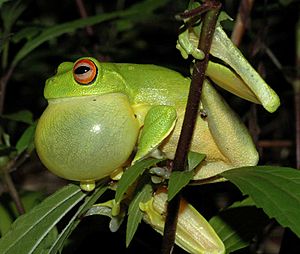 Nearly all amphibians are carnivorous as adults. Many catch their prey by flicking out an elongated tongue with a sticky tip and drawing it back into the mouth where they hold the prey with their jaws. They then swallow their food whole without much chewing. They typically have many small hinged pedicellate teeth, the bases of which are attached to the jaws while the crowns break off at intervals and are replaced. Most amphibians have one or two rows of teeth in both jaws but some frogs lack teeth in the lower jaw. In many amphibians there are also vomerine teeth attached to the bone in the roof of the mouth.

The mouths of reptiles are largely similar to those of mammals. The crocodilians are the only reptiles to have teeth anchored in sockets in their jaws. They are able to replace each of their approximately 80 teeth up to 50 times during their lives. Most reptiles are either carnivorous or insectivorous but turtles are herbivorous. Lacking teeth that are suitable for efficiently chewing of their food, turtles often have gastroliths in their stomach to further grind the plant material. Snakes have a very flexible lower jaw, the two halves of which are not rigidly attached, and numerous other joints in their skull. These modifications allow them to open their mouths wide enough to swallow their prey whole, even if it is wider than they are.

In mammals the buccal cavity is typically roofed by the hard and soft palates, floored by the tongue and surrounded by the cheeks, salivary glands, upper and lower teeth. The upper teeth are embedded in the upper jaw and the lower teeth in the lower jaw, which articulates with the temporal bones of the skull. The lips are soft and fleshy folds which shape the entrance into the mouth. The buccal cavity empties through the pharynx into the oesophagus.

Other functions of the mouth

Crocodilians living in the tropics can gape with their mouths to provide cooling by evaporation from the mouth lining. Some mammals rely on panting for thermoregulation as it increases evaporation of water across the moist surfaces of the lungs, the tongue and mouth. Birds also avoid overheating by gular fluttering, flapping the wings near the gular (throat) skin, similar to panting in mammals. 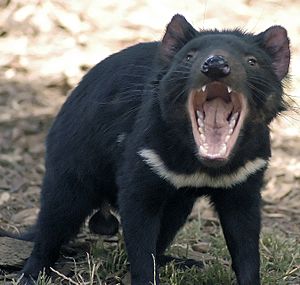 Various animals use their mouths in threat displays. They may gape widely, exhibit their teeth prominently or flash the startling colours of the mouth lining. This display allows each potential combatant an opportunity to assess the weapons of their opponent and lessens the likelihood of actual combat being necessary.

A number of species of bird use a gaping, open beak in their fear and threat displays. Some augment the display by hissing or breathing heavily, while others clap their beaks.

Mouths are also used as part of the mechanism for producing sounds for communication. To produce sounds, air is forced from the lungs over vocal cords in the larynx. In humans, the pharynx, the soft palate, the hard palate, the alveolar ridge, the tongue, the teeth and the lips are termed articulators and play their part in the production of speech. Varying the position of the tongue in relation to the other articulators or moving the lips restricts the airflow from the lungs in different ways producing a range of different sounds. In frogs, the sounds can be amplified using sacs in the throat region.The vocal sacs can be inflated and deflated and act as resonators to transfer the sound to the outside world. A bird's song is produced by the flow of air over a vocal organ at the base of the trachea, the syrinx. For each burst of song the bird opens its beak and closes it again afterwards. The beak may move slightly and may contribute to the resonance but the song originates elsewhere.

All content from Kiddle encyclopedia articles (including the article images and facts) can be freely used under Attribution-ShareAlike license, unless stated otherwise. Cite this article:
Mouth Facts for Kids. Kiddle Encyclopedia.