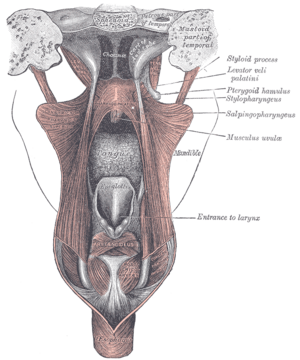 Dissection of the muscles of the palate from behind.

The five muscles of the soft palate play important roles in swallowing and breathing. The muscles are:

A speech sound made with the middle part of the tongue (dorsum) touching the soft palate is known as a velar consonant.

It is possible for the soft palate to retract and elevate during speech to separate the oral cavity (mouth) from the nasal cavity in order to produce the oral speech sounds. If this separation is incomplete, air escapes through the nose, causing speech to be perceived as nasal.

Within the microstructure of the soft palate lie a variety of variably-oriented fibers that create a nonuniform surface with a nonuniform density distribution. The tissue has been characterized as viscoelastic, nonlinear, and anisotropic in the direction of the fibers. Young modulus values range from 585 Pa at the posterior free edge of the soft palate to 1409 Pa where the soft palate attaches to the maxilla. These properties are useful when quantifying the effects of corrective orthopedic devices such as the Hotz Plate on cleft lip.

Quantitative analyses have been done on bilateral and unilateral cleft palate to better understand geometric differences in cleft palate throughout the course of its development and correction. Despite the difficulty in finding common, comparable landmarks between normal soft palates and cleft palates, analytical methods have been devised to assess differences in degree of curvature of the alveolar crest, two-dimensional and three-dimensional surface area, and slope of the alveolar crest.

Finite element analysis has demonstrated effective modeling of soft-palate extension and movement. It has also been an effective tool for evaluating the craniofacial effects of corrective orthopedic devices and cleft lip.

All content from Kiddle encyclopedia articles (including the article images and facts) can be freely used under Attribution-ShareAlike license, unless stated otherwise. Cite this article:
Soft palate Facts for Kids. Kiddle Encyclopedia.