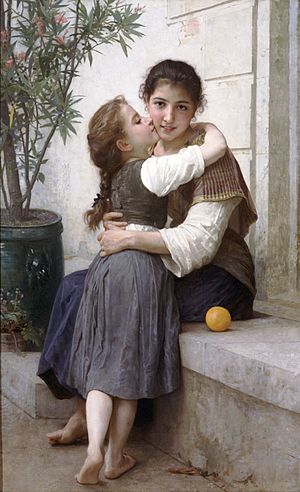 A Little Coaxing A painting by William Bouguereau (1890)

People kiss each other, usually by using their lips and mouth to touch each other. However, there are many different types of kiss, with different meanings. Also, the meaning of kissing may be different in different cultures. Most often, people kiss to show love or affection for each other. Sometimes people kiss as a sign of friendship, sometimes it is a ritual performed to greet someone.

Throughout history, a kiss has been a ritual, formal, symbolic or social gesture indicating devotion, respect or greeting. It appears as a ritual or symbol of religious devotion. For example, in the case of kissing a temple floor, or a religious book or icon. Besides devotion, a kiss has also indicated respect.

In modern times the practice continues, as in the case of a bride and groom kissing at the conclusion of a wedding ceremony or national leaders kissing each other in greeting, and in many other situations.

There are different ways of kissing. People might kiss on the cheeks to greet someone, or to bid them farewell. Depending on the culture it usually does not mean that the kisser loves the person he or she kissed. Kissing when female friends meet is usual in many countries, with some interesting variations. Parisian females often do a rapid double 'air kiss' or 'cheek kiss': a kiss on each side twice, but without lips touching flesh.

Kissing on the lips can result in the transmission of some diseases, including infectious mononucleosis (known as the "kissing disease") and herpes simplex when the infectious viruses are present in saliva. Research indicates that contraction of HIV via kissing is extremely unlikely, although there was a documented case in 1997 of an HIV infection by kissing. Both the woman and infected man had gum disease, so transmission was through the man's blood, not through saliva.

All content from Kiddle encyclopedia articles (including the article images and facts) can be freely used under Attribution-ShareAlike license, unless stated otherwise. Cite this article:
Kiss Facts for Kids. Kiddle Encyclopedia.