Hummingbirds are small birds of the family Trochilidae.

They are among the smallest of birds: most species measure 7.5–13 cm (3–5 in). The smallest living bird species is the 2–5 cm Bee Hummingbird. They can hover in mid-air by rapidly flapping their wings 12–80 times per second (depending on the species). They are also the only group of birds able to fly backwards. Their rapid wing beats do actually hum. They can fly at speeds over 15 m/s (54 km/h, 34 mi/h).

Hummingbirds help flowers to pollinate, though most insects are best known for doing so. The hummingbird enjoys nectar, like the butterfly and other flower-loving insects, such as bees.

Hummingbirds do not have a good sense of smell; instead, they are attracted to color, especially the color red. Unlike the butterfly, the hummingbird hovers over the flower as it drinks nectar from it, like a moth. When it does so, it flaps its wings very quickly to stay in one place, which makes it look like a blur and also beats so fast makes a humming sound. A hummingbird sometimes puts its whole head into the flower to drink the nectar properly. When it takes its head back out, its head is covered with yellow pollen, so that when it moves to another flower, it can pollinate. Or sometimes it may pollinate with its beak.

Like bees, hummingbirds can assess the amount of sugar in the nectar they eat. They reject flowers whose nectar has less than 10% sugar. Nectar is a poor source of nutrients, so hummingbirds meet their needs for protein, amino acids, vitamins, minerals, etc. by preying on insects and spiders.

Most hummingbirds have bills that are long and straight or nearly so, but in some species the bill shape is adapted for specialized feeding. Thornbills have short, sharp bills adapted for feeding from flowers with short corollas and piercing the bases of longer ones. The Sicklebills' extremely decurved bills are adapted to extracting nectar from the curved corollas of flowers in the family Gesneriaceae. The bill of the Fiery-tailed Awlbill has an upturned tip, as in the Avocets. The male Tooth-billed Hummingbird has barracuda-like spikes at the tip of its long, straight bill.

The two halves of a hummingbird's bill have a pronounced overlap, with the lower half (mandible) fitting tightly inside the upper half (maxilla). When hummingbirds feed on nectar, the bill is usually only opened slightly, allowing the tongue to dart out into the nectar.

Like the similar nectar-feeding sunbirds and unlike other birds, hummingbirds drink by using grooved or trough-like tongues which they can stick out a long way. Hummingbirds do not spend all day flying, as the energy cost would be prohibitive; the majority of their activity consists simply of sitting or perching. Hummingbirds feed in many small meals, consuming many small invertebrates and up to twelve times their own body weight in nectar each day. They spend an average of 10–15% of their time feeding and 75–80% sitting and digesting. 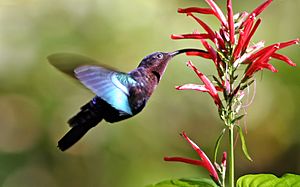 Purple-throated carib feeding at a flower

Since hummingbirds are specialized nectar-eaters, they are tied to the bird-flowers they feed upon. Some species, especially those with unusual bill shapes such as the Sword-billed Hummingbird and the sicklebills, are co-evolved with a small number of flower species.

As far as is known, male hummingbirds do not take part in nesting. Most species build a cup-shaped nest on the branch of a tree or shrub, although a few tropical species normally attach their nests to leaves. The nest varies in size relative to the particular species—from smaller than half a walnut shell to several centimeters in diameter.

Many hummingbird species use spider silk and lichen to bind the nest material together and secure the structure. The unique properties of the silk allow the nest to expand as the young hummingbirds grow. Two white eggs are laid, which despite being the smallest of all bird eggs, are in fact large relative to the adult hummingbird's size. Incubation lasts 14 to 23 days, depending on the species, ambient temperature, and female attentiveness to the nest. The mother feeds her nestlings on small arthropods and nectar by inserting her bill into the open mouth of a nestling, and then regurgitating the food into its crop. 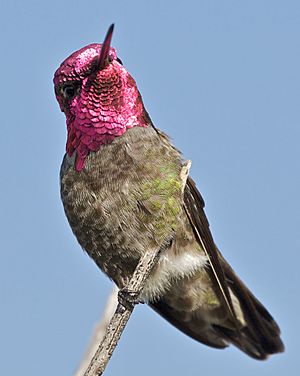 To serve courtship and territorial competition, many male hummingbirds have plumage with bright, varied coloration resulting both from pigmentation in the feathers and from prism-like cells within the top layers of feathers of the head, gorget, breast, back and wings. When sunlight hits these cells, it is split into wavelengths that reflect to the observer in varying degrees of intensity, with the feather structure acting as a diffraction grating. Iridescent hummingbird colors result from a combination of refraction and pigmentation, since the diffraction structures themselves are made of melanin, a pigment, and may also be colored by carotenoid pigmentation and more subdued black, brown or gray colors dependent on melanin.

By merely shifting position, feather regions of a muted-looking bird can instantly become fiery red or vivid green. In courtship displays for one example, males of the colorful Anna's hummingbird orient their bodies and feathers toward the sun to enhance the display value of iridescent plumage toward a female of interest. 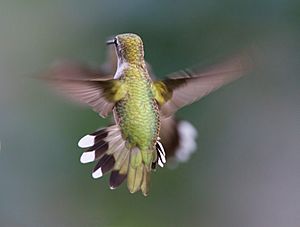 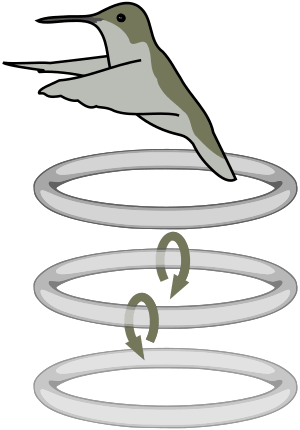 A trail of wake vortices generated by a hummingbird's flight discovered after training a bird to fly through a cloud of neutrally buoyant, helium-filled soap bubbles and recording airflows in the wake with stereo photography.

Two studies of rufous or Anna's hummingbirds in a wind tunnel used particle image velocimetry techniques to investigate the lift generated on the bird's upstroke and downstroke. The birds produced 75% of their weight support during the downstroke and 25% during the upstroke, with the wings making a "figure 8" motion.

Many earlier studies had assumed that lift was generated equally during the two phases of the wingbeat cycle, as is the case of insects of a similar size. This finding shows that hummingbird hovering is similar to, but distinct from, that of hovering insects such as the hawk moth. Further studies using electromyography in hovering rufous hummingbirds showed that muscle strain in the pectoralis major (principal downstroke muscle) was the lowest yet recorded in a flying bird, and the primary upstroke muscle (supracoracoideus) is proportionately larger than in other bird species.

Because of their flying technique, these birds no longer have an alula, while the alula digit has evolved to become absent.

The giant hummingbird's wings beat as few as 12 beats per second and the wings of typical hummingbirds beat up to 80 times per second.

A slow-motion video has shown how the hummingbirds deal with rain when they are flying. To remove the water from their heads, they shake their heads and bodies, similar to a dog shaking, to shed water. Further, when raindrops collectively may weigh as much as 38% of the bird's body weight, hummingbirds shift their bodies and tails horizontally, beat their wings faster, and reduce their wings' angle of motion when flying in heavy rain.

All content from Kiddle encyclopedia articles (including the article images and facts) can be freely used under Attribution-ShareAlike license, unless stated otherwise. Cite this article:
Hummingbird Facts for Kids. Kiddle Encyclopedia.