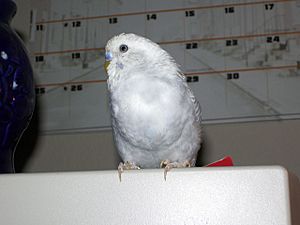 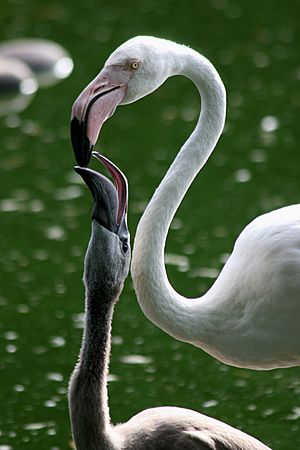 One Greater Flamingo-chick in Basel Zoo is fed on crop milk.

A crop (sometimes called a croup or craw) is a thin-walled expanded portion of the alimentary canal used for storing food before digestion. It is found in many animals. It occurs in birds, some dinosaurs, and invertebrate animals such as gastropods (snails and slugs), earthworms, leeches, and insects.

In a bird's digestive system, the crop is an expanded, muscular pouch near the gullet or throat. It is a part of the digestive tract, essentially an enlarged part of the oesophagus. As with most other organisms that have a crop, the crop is used to temporarily store food. Not all birds have a crop. In adult doves and pigeons, the crop can produce crop milk to feed newly hatched birds.

Scavenging birds, such as vultures, will gorge themselves when prey is abundant, causing their crop to bulge. They subsequently sit, sleepy or half torpid, to digest their food.

Most raptors, including hawks, eagles and vultures (as stated above), have a crop; however, owls do not.

Cropping is used by bees to temporarily store nectar of flowers. When bees "suck" nectar, it is stored in their crops.

In a gizzard, the food is ground down before digestion, usually by stones. Gizzards have a tougher lining, and muscles. The gizzard is lower down the digestive tract, and more like a part of the stomach.

The crop is just a storage device. Often, it pays a bird to feed while the going is good, and do the digestion later. In many birds and in bees, the food is eventually brought back to the nest and given to family members.

In other species, food brought back to the nest is pre-digested. That would mean it is regurgitated (brought up) from the stomach.

All content from Kiddle encyclopedia articles (including the article images and facts) can be freely used under Attribution-ShareAlike license, unless stated otherwise. Cite this article:
Crop (anatomy) Facts for Kids. Kiddle Encyclopedia.