Insects, are a class in the phylum Arthropoda. They are small terrestrial invertebrates which have a hard exoskeleton.

Insects are the largest group of animals on earth by far: about 926,400 different species have been described. They are more than half of all known living species. They may be over 90% of animal species on Earth.

New species of insects are continually being found. Estimates of the total number of species range from 2 million to 30 million.

Insects have six legs; and most have wings. Insects were the first animals capable of flight. As they develop from eggs, insects undergo metamorphosis. Insects live all over the planet: almost all are terrestrial (live on land). Few insects live in the oceans or in very cold places, such as Antarctica. The most species live in tropical areas.

Some people call all insects "bugs", but this is not correct. Only some insects are true bugs, which is a particular order of insects. People who study insects are called entomologists. 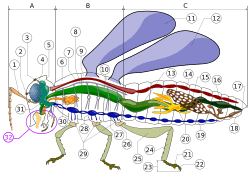 Insects have exoskeletons (skeletons on the outside). Their skeletons are made out of thin, hard pieces or plates, like armour, made of chitin. All together, these pieces make a hard layer around the insect’s body. The exoskeleton protects the insect.

The body of an insect has three main parts: a head, a thorax, and an abdomen. On the head are an insect’s compound eyes, its two antennae (they feel and smell things), and its mouth.

On the thorax, insects have wings and legs. All insects have six legs (three pairs of jointed legs) and usually four wings (two pairs).

Just like our muscles connect to our bones to make us walk and stand up, the muscles of an insect connect to the exoskeleton to make it walk and move. Their muscles are on the inside of their skeleton.

Insects are cold-blooded, which means that they cannot control their body temperature. This means that insects are not good at surviving the cold, at any rate out in the open. In the winter, many insects go into something called diapause, which is the insect version of hibernation. Some insects, like cockroaches, cannot go into diapause and they will die if it gets too cold outside. This is why cockroaches love living in people's warm houses. 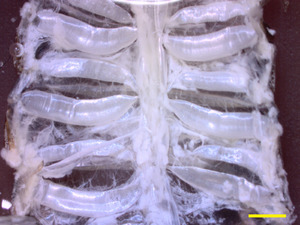 Tracheal system of a cockroach. The largest tracheae run across the width of the body and are horizontal in this image. Scale bar: 2 mm

Insect respiration happens without lungs. There is a system of internal tubes and sacs through which gases diffuse or are actively pumped. Air is taken in through openings on the sides of the abdomen called spiracles. Oxygen gets to tissues that need it through their trachea (element 8 in diagram). As larvae, many insects have gills that can extract oxygen dissolved in water, while others need to rise to the water surface to replenish air supplies which may be held or trapped in special structures.

Adult insects use oxygen at a high rate when they fly. They need it for the flight muscles, the most active tissue known in biology. The flight muscles use oxygen at a huge rate: 100 ccs of oxygen for every single cc of tissue per hour. With this system, the greatest diameter a muscle could have (and still consume oxygen at this rate) is about 0.5cm. Even with special extra arrangements, insects cannot get larger than about 11cm long. The largest insect bodies are about as big as a mouse.

Some insects also use a molecule called haemocyanin, which does the same job as haemoglobin does in vertebrates (but less efficiently). The insect circulatory system has no veins or arteries. The 'blood' is called haemolymph, and moves around in the space called the haemocoel. The organs sit in the haemocoel and are bathed in the haemolymph. The 'heart' is little more than a single tube which pulses (squeezes). 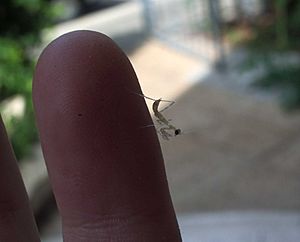 Insects start life as an egg. Usually a female (mother) insect lays eggs, but a few species have live birth (the eggs develop inside the mother). The eggs are small; but they can usually be seen with the naked eye.

After the eggs hatch, two kinds of development may occur. Some insects have what is called 'incomplete metamorphosis'. This means that a small insect, called a nymph comes out of the egg, and the nymph looks almost the same as the adult insect. As the nymph grows, it does not change the way it looks, but only how big it is. It goes through a number of stages, called 'instars'. Grasshoppers grow in this way.

The oldest known insect fossil is the Devonian Rhyniognatha, from the 396 million year old Rhynie chert. It may have superficially resembled a modern-day silverfish insect. This species already possessed mandibles of a type associated with winged insects, suggesting that wings may already have evolved at this time. Thus, the first insects probably appeared earlier, in the Silurian period.

In 2008, researchers uncovered what they believe is the world's oldest known full-body impression of a primitive flying insect, a 300 million-year-old specimen from the Carboniferous period.

The origins of insect flight remain obscure, since the earliest winged insects currently known appear to have been capable fliers. Some extinct insects had an additional pair of winglets attaching to the first segment of the thorax, for a total of three pairs. It seems the insects were not a particularly successful group of animals before they evolved wings.

Upper Carboniferous and Lower Permian insect orders include both living groups and a number of Palaeozoic groups, now extinct. During this era, some giant dragonfly-like forms reached wingspans of 55 to 70 cm (22 to 28 in) making them far larger than any living insect.

This gigantism may have been due to higher atmospheric oxygen levels, which allowed increased respiratory efficiency. The lack of flying vertebrates could have been another factor. Many of the early groups became extinct during the Permian-Triassic extinction event, the largest mass extinction in the history of the Earth, around 252 million years ago. 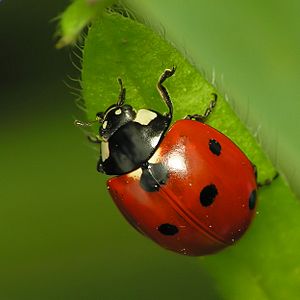 A beetle (ladybird or ladybug). The red part is the hard front pair of wings, or elytra

Spiders, scorpions, and similar animals are not insects; they are arachnids. Arachnids are arthropods that have four pairs of legs. Centipedes are also arthropods, but not insects: they are in a subphylum called the Myriapoda. 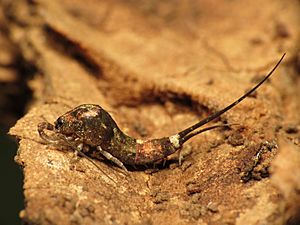 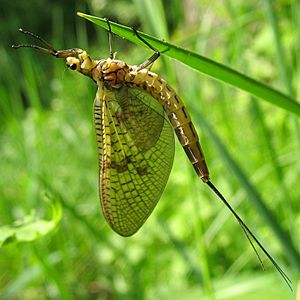 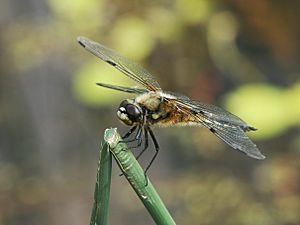 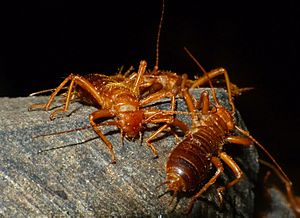 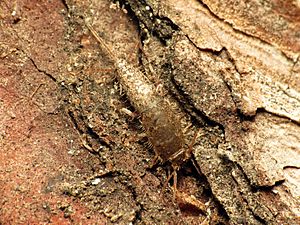 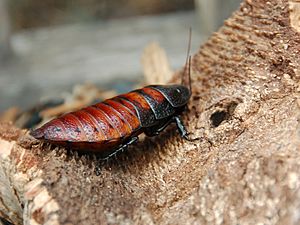 This taxonomy lists some of the better known groups of insects. 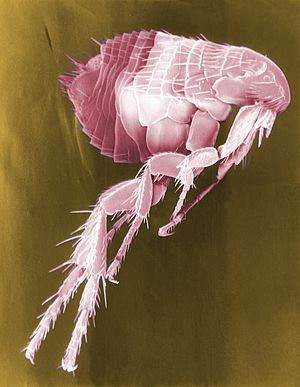 Pests can be harmful to people in different ways. Some are parasites, such as lice and bed bugs. Some of these parasite insects can spread diseases, such as mosquitoes spreading malaria.

Other pest insects do not directly hurt people. Termites and some beetles eat wood and sometimes eat buildings, such as houses. However, termites also help break down the trees and branches that fall on the forest floor. Many insects eat agricultural products (plants meant for people to eat). Grasshoppers are one example of pest insects that eat plants in agriculture.

Some insects are useful to us. Bees make honey. The larvae of some moths make silk, which people use to make clothing. In some parts of the world, people actually eat insects. Eating insects for food is called entomophagy.

Many bees and flies pollinate plants. This means the insects help the plants make seeds by moving pollen from one flower to another. Some good insects eat pest insects, such as lady beetles (or ladybirds or ladybugs) eating aphids. Many insects eat dead plants and animals.

All content from Kiddle encyclopedia articles (including the article images and facts) can be freely used under Attribution-ShareAlike license, unless stated otherwise. Cite this article:
Insect Facts for Kids. Kiddle Encyclopedia.