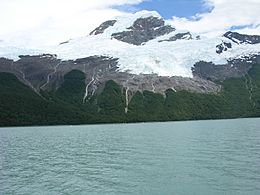 Most of the Earth's surface is covered with water. The roughly 22 percent that is not, is called land (as opposed to water). Land can have different types of soil. It may be covered with stones, sand, dirt, etc. Sometimes it is not clear where land ends and a body of water begins.

A land can also mean some territory, forming part of a country.

History of land on Earth 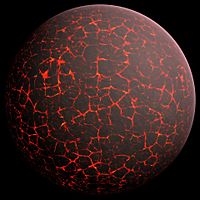 An animation showing the movement of the continents from the separation of Pangaea until the present day.

The earliest material found in the Solar System is dated to 7017144129870720000♠4.5672±0.0006 bya (billion years ago); therefore, the Earth itself must have been formed by accretion around this time. By 7017143271504000000♠4.54±0.04 bya, the primordial Earth had formed. The formation and evolution of the Solar System bodies occurred in tandem with the Sun. In theory, a solar nebula partitions a volume out of a molecular cloud by gravitational collapse, which begins to spin and flatten into a circumstellar disc, which the planets then grow out of in tandem with the star. A nebula contains gas, ice grains and dust (including primordial nuclides). In nebular theory, planetesimals commence forming as particulate matter accrues by cohesive clumping and then by gravity. The assembly of the primordial Earth proceeded for 10–7014631152000000000♠20 myr.

Earth's atmosphere and oceans were formed by volcanic activity and outgassing that included water vapor. The origin of the world's oceans was condensation augmented by water and ice delivered by asteroids, proto-planets, and comets. In this model, atmospheric "greenhouse gases" kept the oceans from freezing while the newly forming Sun was only at 70% luminosity. By 7017110451600000000♠3.5 bya, the Earth's magnetic field was established, which helped prevent the atmosphere from being stripped away by the solar wind. The atmosphere and oceans of the Earth continuously shape the land by eroding and transporting solids on the surface.

The crust, which currently forms the Earth's land, was created when the molten outer layer of the planet Earth cooled to form a solid mass as the accumulated water vapor began to act in the atmosphere. Once land became capable of supporting life, biodiversity evolved over hundreds of million years, expanding continually except when punctuated by mass extinctions.

The two models that explain land mass propose either a steady growth to the present-day forms or, more likely, a rapid growth early in Earth history followed by a long-term steady continental area. Continents formed by plate tectonics, a process ultimately driven by the continuous loss of heat from the Earth's interior. On time scales lasting hundreds of millions of years, the supercontinents have formed and broken apart three times. Roughly 7016236682000000000♠750 mya (million years ago), one of the earliest known supercontinents, Rodinia, began to break apart. The continents later recombined to form Pannotia, 600–7016170411040000000♠540 mya, then finally Pangaea, which also broke apart 7015568036800000000♠180 mya.

All content from Kiddle encyclopedia articles (including the article images and facts) can be freely used under Attribution-ShareAlike license, unless stated otherwise. Cite this article:
Land Facts for Kids. Kiddle Encyclopedia.