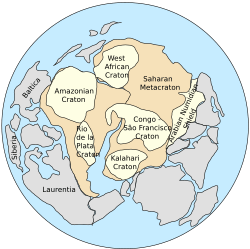 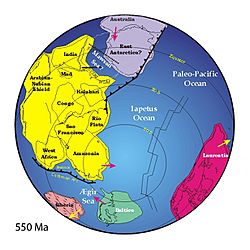 Pannotia (or Greater Gondwanaland and Vendian supercontinent) is a Neoproterozoic supercontinent. It may have existed during the Ediacaran period (~600 million years ago), to the end of the Precambrian (about 541 mya). After that, it split into smaller continents. The small ones were Laurentia, Siberia and Baltica, with the main landmass Gondwana south of them.

About 750 million years ago the older supercontinent Rodinia split apart into three continents. They were earlier forms of Laurasia and Gondwana, and the continental craton of Congo. About 600 milion years ago, they formed Pannotia.

Pannotia was short-lived. The collisions that formed Pannotia were brief collisions, and the continents making up Pannotia already had active rifting. By about 550 million years ago , or only about 50 million years after Pannotia formed, Pannotia separated into four continents. Later the landmasses would recombine to form the most recent supercontinent, Pangaea.

All content from Kiddle encyclopedia articles (including the article images and facts) can be freely used under Attribution-ShareAlike license, unless stated otherwise. Cite this article:
Pannotia Facts for Kids. Kiddle Encyclopedia.