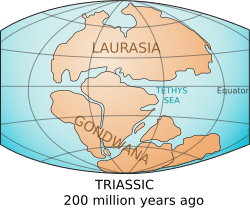 Laurasia was a supercontinent. It had been the northern part of the Pangaea global supercontinent. Pangaea split in the Jurassic into Laurasia and Gondwana to the south.

Laurasia included most of the landmasses which make up today's continents of the northern hemisphere, chiefly Laurentia (the name given to the North American craton), Europe, Baltica, Siberia, Kazakhstan, and China.

The name combines the names of Laurentia and Eurasia.

Although Laurasia is known as a Mesozoic phenomenon, today it is believed that the same continents that formed the later Laurasia also existed as a coherent supercontinent after the breakup of Rodinia around 1 billion years ago. To avoid confusion with the Mesozoic continent, this is referred to as Proto-Laurasia.

All content from Kiddle encyclopedia articles (including the article images and facts) can be freely used under Attribution-ShareAlike license, unless stated otherwise. Cite this article:
Laurasia Facts for Kids. Kiddle Encyclopedia.