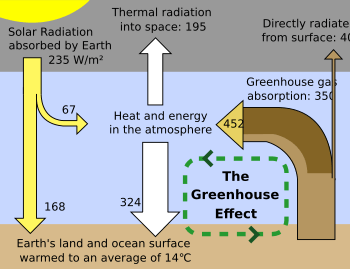 A diagram of the greenhouse effect. Energy flows between space, the atmosphere, and Earth's surface. Energy exchanges are written in watts per square metre (W/m2).

A greenhouse gas is a gas which reflects radiation that the Earth emits, and stops it from being lost into space. This makes the Earth hotter than it would be without greenhouse gases. This is called the "greenhouse effect".

Without greenhouse gases, life as we know it would probably not be possible on Earth, because heat is important for life. Natural emissions of greenhouse gases vary. For example, the great volcanic eruptions that created the Siberian Traps a quarter billion years ago may have released enough gases to partly cause the Permian–Triassic extinction event which killed most life on Earth.

However, humans are adding greenhouse gases to the atmosphere. This is making the planet's average temperature rise by increasing the greenhouse effect. The most important greenhouse gas that humans add to the atmosphere is carbon dioxide, which is now about 0.04% of the atmosphere. Carbon dioxide is released when people burn fossil fuels, like oil, coal, and natural gas. Carbon dioxide emissions come mostly from transportation, energy and industries. The biggest is burning fossil fuels to make heat and electricity: but if we look at where the electricity is used the biggest is industry. The Food and Agriculture Organization said emissions associated with livestock added up to 7.1 gigatonnes (GT) of carbon dioxide equivalent (CO2-eq) per year – or 14.5% of all human-caused greenhouse releases. This is more than the 13% that comes from global transport (including all cars and planes) each year.

Water vapour is the most abundant of these gases, and it reacts to climate change. In other words, when the atmosphere is warm, there is more water vapour. Thus there is a higher possibility of clouds and precipitation.

In addition to burning fossil fuels, human beings reduce the planets absorption of carbon dioxide from the atmosphere by cutting down trees. We also add methane to the atmosphere by raising cattle and other farm animals, such as geese, turkeys, pigs, chickens, and sheep. Scientists have shown that producing 1 kg of beef results in more CO2 emissions than going for a three-hour drive while leaving all the lights on at home. Additionally, human activity adds water vapor to the atmosphere through increased evaporation by the use of cooling towers in thermal cycle power plants or creation of artificial lakes. These activities contribute to global warming.

All content from Kiddle encyclopedia articles (including the article images and facts) can be freely used under Attribution-ShareAlike license, unless stated otherwise. Cite this article:
Greenhouse gas Facts for Kids. Kiddle Encyclopedia.