Ozone is a chemical with the symbol O3. This means one molecule of ozone is made of 3 oxygen atoms. Ozone is also called trioxygen. Ozone is formed from dioxygen by the action of ultraviolet light and also atmospheric electrical discharges. It is present in low concentrations throughout the Earth's atmosphere. In total, ozone makes up only 0.6 ppm of the atmosphere.

Ozone is important to planet Earth. There is a portion of the stratosphere with a high concentration of ozone, called the ozone layer. The ozone layer filters out damaging ultraviolet radiation from the Sun, like a kind of sun screen. Without this ozone layer things would not have been able to live on the surface of our planet.

However, ozone is toxic to animals and plants above concentrations of about 0.1 ppm. In humans, it can cause nasal and throat irritation, and nausea. 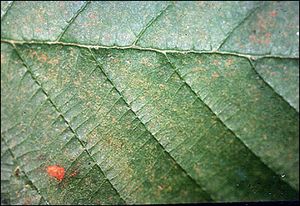 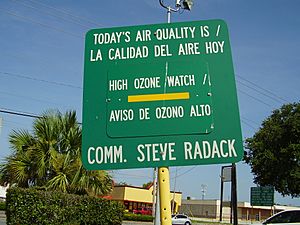 There is a great deal of evidence to show that ground-level ozone can harm lung function and irritate the respiratory system. Exposure to ozone (and the pollutants that produce it) is linked to premature death, asthma, bronchitis, heart attack, and other cardiopulmonary problems.

The largest use of ozone is in the preparation of pharmaceuticals, synthetic lubricants, and many other commercially useful organic compounds, where it is used to sever carbon-carbon bonds. It can also be used for bleaching substances and for killing microorganisms in air and water sources. Many municipal drinking water systems kill bacteria with ozone instead of the more common chlorine. Ozone has a very high oxidation potential. Ozone does not form organochlorine compounds, nor does it remain in the water after treatment. Ozone can form the suspected carcinogen bromate in source water with high bromide concentrations. The U.S. Safe Drinking Water Act mandates that these systems introduce an amount of chlorine to maintain a minimum of 0.2 μmol/mol residual free chlorine in the pipes, based on results of regular testing. Where electrical power is abundant, ozone is a cost-effective method of treating water, since it is produced on demand and does not require transportation and storage of hazardous chemicals. Once it has decayed, it leaves no taste or odour in drinking water.

Although low levels of ozone have been advertised to be of some disinfectant use in residential homes, the concentration of ozone in dry air required to have a rapid, substantial effect on airborne pathogens exceeds safe levels recommended by the U.S. Occupational Safety and Health Administration and Environmental Protection Agency. Humidity control can vastly improve both the killing power of the ozone and the rate at which it decays back to oxygen (more humidity allows more effectiveness). Spore forms of most pathogens are very tolerant of atmospheric ozone in concentrations at which asthma patients start to have issues.

Industrially, ozone is used to:

Ozone is a reagent in many organic reactions in the laboratory and in industry. Ozonolysis is the cleavage of an alkene to carbonyl compounds.

Many hospitals around the world use large ozone generators to decontaminate operating rooms between surgeries. The rooms are cleaned and then sealed airtight before being filled with ozone which effectively kills or neutralizes all remaining bacteria.

Ozone is used as an alternative to chlorine or chlorine dioxide in the bleaching of wood pulp. It is often used in conjunction with oxygen and hydrogen peroxide to eliminate the need for chlorine-containing compounds in the manufacture of high-quality, white paper.

Ozone can be used to detoxify cyanide wastes (for example from gold and silver mining) by oxidising cyanide to cyanate and eventually to carbon dioxide.

Devices generating high levels of ozone, some of which use ionization, are used to sanitize and deodorize uninhabited buildings, rooms, ductwork, woodsheds, boats and other vehicles.

In the U.S., air purifiers emitting low levels of ozone have been sold. This kind of air purifier is sometimes claimed to imitate nature's way of purifying the air without filters and to sanitize both it and household surfaces. The United States Environmental Protection Agency (EPA) has declared that there is "evidence to show that at concentrations that do not exceed public health standards, ozone is not effective at removing many odor-causing chemicals" or "viruses, bacteria, mold, or other biological pollutants". Furthermore, its report states that "results of some controlled studies show that concentrations of ozone considerably higher than these [human safety] standards are possible even when a user follows the manufacturer's operating instructions".

Ozonated water is used to launder clothes and to sanitize food, drinking water, and surfaces in the home. According to the U.S. Food and Drug Administration (FDA), it is "amending the food additive regulations to provide for the safe use of ozone in gaseous and aqueous phases as an antimicrobial agent on food, including meat and poultry." Studies at California Polytechnic University demonstrated that 0.3 μmol/mol levels of ozone dissolved in filtered tapwater can produce a reduction of more than 99.99% in such food-borne microorganisms as salmonella, E. coli 0157:H7 and Campylobacter. This quantity is 20,000 times the WHO-recommended limits stated above. Ozone can be used to remove pesticide residues from fruits and vegetables.

Ozone is used in homes and hot tubs to kill bacteria in the water and to reduce the amount of chlorine or bromine required by reactivating them to their free state. Since ozone does not remain in the water long enough, ozone by itself is ineffective at preventing cross-contamination among bathers and must be used in conjunction with halogens. Gaseous ozone created by ultraviolet light or by corona discharge is injected into the water.

Ozone is also widely used in treatment of water in aquariums and fishponds. Its use can minimize bacterial growth, control parasites, eliminate transmission of some diseases, and reduce or eliminate "yellowing" of the water. Ozone must not come in contact with fishes' gill structures. Natural salt water (with life forms) provides enough "instantaneous demand" that controlled amounts of ozone activate bromide ions to hypobromous acid, and the ozone entirely decays in a few seconds to minutes. If oxygen-fed ozone is used, the water will be higher in dissolved oxygen and fishes' gill structures will atrophy, making them dependent on oxygen-enriched water.

Ozonation – a process of infusing water with ozone – can be used in aquaculture to facilitate organic breakdown. Ozone is also added to recirculating systems to reduce nitrite levels through conversion into nitrate.

All content from Kiddle encyclopedia articles (including the article images and facts) can be freely used under Attribution-ShareAlike license, unless stated otherwise. Cite this article:
Ozone Facts for Kids. Kiddle Encyclopedia.