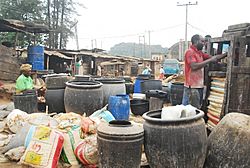 Removal of cyanide from cassava in Nigeria.

Cyanides are chemicals that contain the cyano-group C≡N. Organic compounds that contain the CN group are called nitriles. In that group a carbon atom has three chemical bonds to a nitrogen atom. The group is present in many substances. Those substances that can release the compound CN are highly poisonous.

Certain bacteria, fungi and algae are able to produce cyanides. Cyanides are also found in certain foods or plants, such as cassava. The cyanides serve as a defense against being eaten by herbivores.

In popular culture, cyanides are said to be highly toxic. There are some cyanides that are, but others that are not. Prussian blue, a cyanide compound, is given as a treatment to poisoning with thallium and caesium, for example.

Hydroxocobalamin reacts with cyanide to form cyanocobalamin, which can be safely eliminated by the kidneys. This antidote kit is sold under the brand name Cyanokit and was approved by the U.S. FDA in 2006.

All content from Kiddle encyclopedia articles (including the article images and facts) can be freely used under Attribution-ShareAlike license, unless stated otherwise. Cite this article:
Cyanide Facts for Kids. Kiddle Encyclopedia.