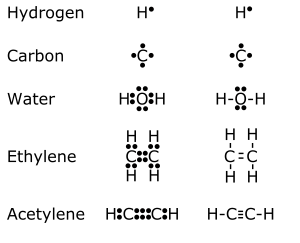 Chemical bonds are what joins atoms together. Atoms bonded stay together unless the needed amount of energy is transferred to the bond.

In general, strong chemical bonding comes with the sharing or transfer of electrons between the participating atoms. The atoms in molecules, crystals, metals and diatomic gases are held together by chemical bonds.

There are two types of bonds; covalent and ionic. Covalent bonds form when atoms share electrons. Ionic bonding is the attraction between oppositely charged ions. Chemical bonds are negatively charged electrons that are pulling protons into each other.

Because atoms and molecules are three-dimensional, it is difficult to use a single method to indicate orbitals and bonds. In molecular formulas the chemical bonds between atoms are indicated in different ways depending on the type of discussion.

Bonds can be double bonds or triple bonds

All content from Kiddle encyclopedia articles (including the article images and facts) can be freely used under Attribution-ShareAlike license, unless stated otherwise. Cite this article:
Chemical bond Facts for Kids. Kiddle Encyclopedia.