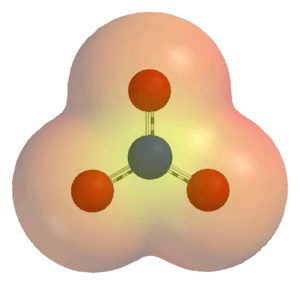 An electrostatic potential map of the nitrate ion (NO3−). The 3-dimensional shell represents a single arbitrary isopotential

An ion is an electrically charged atom or group of atoms. It is a part of an atom, or part of a group of atoms (molecule). It is "charged" so it will move near electricity. This is because atoms are made of three smaller parts (1) neutrons (with no charge), and equal numbers of (2) charged protons and (3) oppositely-charged electrons. An ion has unequal numbers of protons and electrons. Making an ion from an atom or molecule is called ionization.

In chemistry, a molecule or atom that is electrically charged is called an ion. An ion has more or less electrons than there are protons in an atom. The process of giving or taking electrons away from a normal atom and turning it into an ion is called ionization.

In physics, atomic nuclei that have been completely ionized are called charged particles. These are ones in alpha radiation.

An ionized gas is called plasma.

A simple ion is formed from a single atom.

Positive ions are called cations. They are attracted to cathodes (negatively charged electrodes). (Cation is pronounced "cat eye on", not "kay shun".) All simple metal ions are cations.

Negative ions are called anions. They are attracted to anodes (positively charged electrodes). All simple non-metal ions (except H+, which is a proton) are anions (except NH4+).

Transition metals can form more than one simple cation with different charges.

Most ions have a charge of less than 4, but some can have higher charges.

Michael Faraday was the first person to write a theory about ions, in 1830. In his theory, he said what the portions of molecules were like that moved to anions or cations. Svante August Arrhenius showed how this happened. He wrote this in his doctoral dissertation in 1884 (University of Uppsala). The university did not accept his theory at first (he only just passed his degree). But in 1903, he won the Nobel Prize in Chemistry for the same idea.

All content from Kiddle encyclopedia articles (including the article images and facts) can be freely used under Attribution-ShareAlike license, unless stated otherwise. Cite this article:
Ion Facts for Kids. Kiddle Encyclopedia.