Plasma is a 4th state of matter. 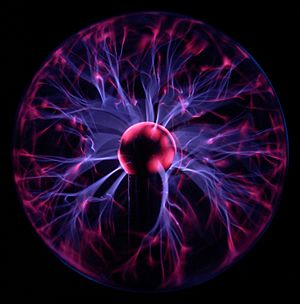 A plasma lamp, showing some of the more complex things a plasma can do. The colors come from the gas in the lamp. Each type of gas makes a different color 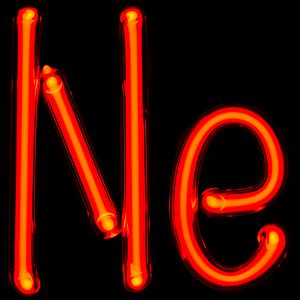 Gas-filled tubes often contain plasma. This one shows neon. The color of the tube gives a hint to the gas inside

Plasma is created by adding energy to a gas so that some of its electrons leave its atoms. This is called ionization. It results in negatively charged electrons, and positively charged ions. Unlike the other states of matter, the charged particles in a plasma will react strongly to electric and magnetic fields (i.e. electromagnetic fields). If a plasma loses heat, the ions will re-form into a gas, emitting the energy which had caused them to ionize.

Over 99% of the matter in the visible universe is believed to be plasma. When the atoms in a gas are broken up, the pieces are called electrons and ions. Because they have an electric charge, they are pulled together or pushed apart by electric fields and magnetic fields. This makes a plasma act differently than a gas. For example, magnetic fields can be used to hold a plasma, but not to hold a gas. Plasma is a better conductor of electricity than copper.

On Earth, lightning makes plasma. Artificial (man-made) uses of plasma include fluorescent lightbulbs, neon signs, and plasma displays used for television or computer screens, as well as plasma lamps and globes which are a popular children's toy and room decoration. Scientists are experimenting with plasma to make a new kind of nuclear power, called fusion, which would be much better and safer than ordinary nuclear power, and would produce much less radioactive waste.

All content from Kiddle encyclopedia articles (including the article images and facts) can be freely used under Attribution-ShareAlike license, unless stated otherwise. Cite this article:
Plasma (physics) Facts for Kids. Kiddle Encyclopedia.