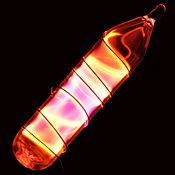 A neon lamp with Neon in it

A neon lamp is a light bulb that can make many colors when Noble gasses are inside of the bulb. For example, helium would give a light yellow color and neon would make a red or orange color when an electric current is run in the tube. It is normally used to make letters for signs. Different gases make different colors. Neon Lamps are used to make neon signs.

From left to right: Helium, Neon, Argon, Krypton, and Xenon. 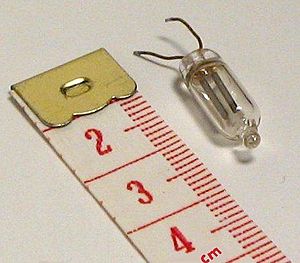 A neon glow lamp is a little orange light bulb. There is an electric current that flows between the two electrodes.

Switch on a power strip, illuminated by a neon lamp

Small neon lamps are most widely used as visual indicators in electronic equipment and appliances, due to their low power consumption, long life, and ability to operate on mains power.

Neon lamps are commonly used as low-voltage surge protectors, but they are generally inferior to gas discharge tube (GDT) surge protectors (which can be designed for higher voltage applications). Neon lamps have been used as an inexpensive method to protect RF receivers from voltage spikes (lamp connected to RF input and chassis ground), but they are not suitable for higher-power RF transmitters. 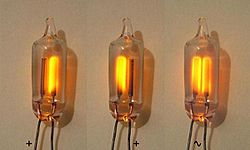 Most small neon (indicator-sized) lamps, such as the common NE-2, have a break-down voltage of around 90 volts. When driven from a DC source, only the negatively charged electrode (cathode) will glow. When driven from an AC source, both electrodes will glow (each during alternate half cycles). These attributes make neon bulbs (with series resistors) a convenient low-cost voltage tester. By examining which electrode is glowing they can reveal whether a given voltage source is AC or DC, and if DC, the polarity of the points being tested.

Like other gas discharge lamps, the neon bulb has negative resistance; its voltage falls with increasing current after the bulb reaches its breakdown voltage. Therefore, the bulb has hysteresis; its turn-off (extinction) voltage is lower than its turn-on (breakdown) voltage. This allows it to be used as an active switching element. Neon bulbs were used to make relaxation oscillator circuits, using this mechanism, sometimes referred to as the Pearson–Anson effect for low frequency applications such as flashing warning lights, stroboscopes tone generators in electronic organs, and as time bases and deflection oscillators in early cathode ray oscilloscopes. Neon bulbs can also be bistable, and were even used to build digital logic circuits such as logic gates, flip-flop, binary memories, and digital counters. These applications were sufficiently common that manufacturers made neon bulbs specifically for this use, sometimes called "circuit-component" lamps. At least some of these lamps have a glow concentrated into a small spot on the cathode, which made them unsuited to use as indicators. A variant of the NE-2 type lamp for circuit applications, the NE-77, have three wire electrodes in the bulb (in a plane) instead of the usual two, the third for use as a control electrode.

Neon lamps have been historically used as microwave and millimeter-wave detectors.

The digits of a Nixie tube.

Neon lamps with several shaped electrodes were used as alphanumerical displays known as Nixie tubes. These have since been replaced by other display devices such as light emitting diodes, vacuum fluorescent displays, and liquid crystal displays.

Since at least the 1940s, argon, neon, and phosphored glow thyratron latching indicators (which would light up upon an impulse on their starter electrode and extinguish only after their anode voltage was cut) were available for example as self-displaying shift registers in large-format, crawling-text dot-matrix displays, or, combined in a 4×4, four-color phosphored-thyratron matrix, as a stackable 625-color RGBA pixel for large video graphics arrays. Multiple-cathode and/or anode glow thyratrons called Dekatrons could count forwards and backwards while their count state was visible as a glow on one of the numbered cathodes. These were used as self-displaying divide-by-n counter/timer/prescalers in counting instruments, or as adder/subtracters in calculators.

In 1930s radio sets, neon lamps were used as tuning indicators, called "tuneons" and would give a brighter glow as the station was tuned in correctly.

Because of their comparatively short response time, in the early development of television neon lamps were used as the light source in many mechanical-scan TV displays.

Novelty glow lamps with shaped electrodes (such as flowers and leaves), often coated with phosphors, have been made for artistic purposes. In some of these, the glow that surrounds an electrode is part of the design.

All content from Kiddle encyclopedia articles (including the article images and facts) can be freely used under Attribution-ShareAlike license, unless stated otherwise. Cite this article:
Neon lamp Facts for Kids. Kiddle Encyclopedia.