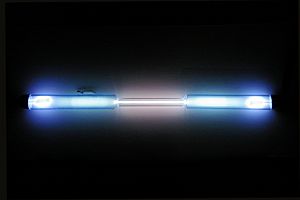 A discharge tube filled with Krypton

Krypton is a noble gas which means it does not react with many other elements. It is clear and has no taste or smell. The atmosphere is only about one millionth part krypton. The name kypton comes from the Greek word kryptos meaning hidden. It is used in fluorescent lamps, flashbulbs, and as a wavelength standard. Krypton has very few compounds. 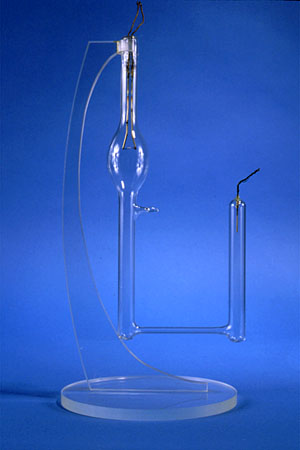 Krypton is number 36 on the periodic table. Its symbol is Kr.

Krypton was found by Sir William Ramsay and Morris Travers in Great Britain in 1898. Ramsay was given the 1904 Nobel Prize in Chemistry for his work on noble gases. It was a difficult gas to discover; Ramsay suspected it existed but only found it by removing other gases. This is why he gave it the name Krypton.

There is no mineral called Kryptonite or planet called Krypton, which features in the Superman comics by Jerry Siegel and Joe Shuster. The fictional planet is probably better known than the real chemical element called Krypton.

All content from Kiddle encyclopedia articles (including the article images and facts) can be freely used under Attribution-ShareAlike license, unless stated otherwise. Cite this article:
Krypton Facts for Kids. Kiddle Encyclopedia.