Cadmium has 8 natural isotopes. 5 are radioactive, but 3 have very long half-lives so their radioactivity is almost nothing.

Cadmium is a moderately reactive metal. It corrodes in moist air and dissolves in acids. It burns in air when powdered to make the brown cadmium oxide. 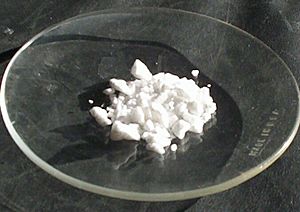 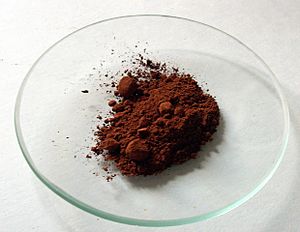 Cadmium was found by two chemists, German chemist Friedrich Stromeyer discovered it in 1817, and Karl Herman also discovered it in 1818. They were looking at an impurity in zinc carbonate and found cadmium. For about 100 years, Germany made most cadmium. Cadmium iodide was used as a medicine although it was toxic. 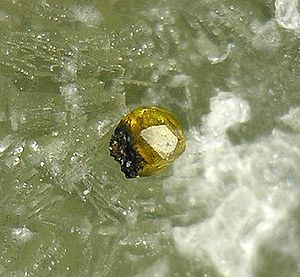 Cadmium ores are rare. Greenockite, a cadmium sulfide mineral is the only main ore and it is found with sphalerite, a zinc sulfide. Because of this, most cadmium comes from zinc processing. Cadmium as a metal is very rare but is found in one place in Russia.

In the 1930s and 1940s cadmium was mainly used to plate steel to prevent it from corroding. Then cadmium sulfide was used as a pigment in paint.

Cadmium is not used in the human body or any other animal. A diatom uses cadmium, though.

Cadmium is a highly toxic metal. Dust of cadmium or its compounds is very dangerous and can kill. Some countries have banned cadmium from electronics. Cigarette smoking is the most important source of cadmium. Smokers have about 4 times more cadmium in their blood than nonsmokers (people who do not smoke). Cadmium is thought to be carcinogenic, although people still debate whether it is other things with the cadmium that cause cancer, like arsenic.

All content from Kiddle encyclopedia articles (including the article images and facts) can be freely used under Attribution-ShareAlike license, unless stated otherwise. Cite this article:
Cadmium Facts for Kids. Kiddle Encyclopedia.