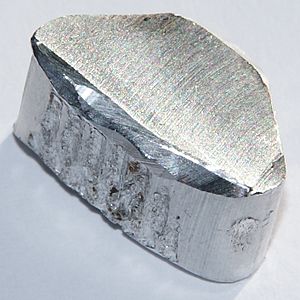 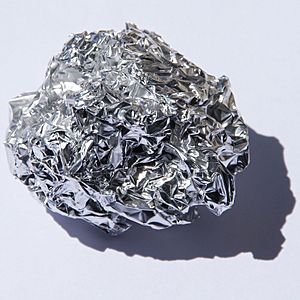 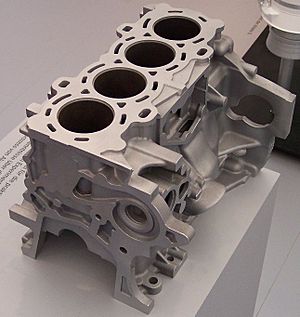 Aluminium (American spelling: aluminum) is a chemical element. The symbol for aluminium is Al, and its atomic number is 13. Aluminium is the most abundant metal. It is known for its resistance to corrosion and its light weight. Aluminum is used in many industries to manufacture a large variety of products and is very important to the world economy.

Aluminium is remarkable for its low density and its ability to resist corrosion. Aluminium and its alloys are vital to the aerospace industry and important in transportation and building industries, such as building facades and window frames. The oxides and sulfates are the most useful compounds of aluminium.

Sometimes there can be disagreement about who discovered something, even when all the facts are known. Friedrich Wöhler is credited with isolating aluminum in 1827. The metal, however, had indeed been produced for the first time two years earlier — but in an impure form — by the Danish physicist and chemist Hans Christian Ørsted. Therefore, Ørsted can also be listed as the discoverer of the metal.

Aluminium is a very good conductor of electricity and heat. It is light and strong. It can be hammered into sheets (malleable) or pulled out into wires (ductile). It is a highly reactive metal, although it is corrosion resistant.

Aluminium prevents corrosion by forming a small, thin layer of aluminium oxide on its surface. This layer protects the metal by preventing oxygen from reaching it. Corrosion can not occur without oxygen. Because of this thin layer, the reactivity of aluminium is not seen. 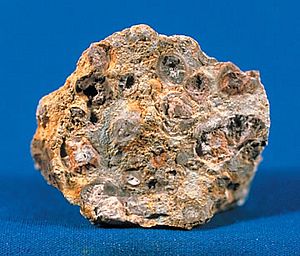 Aluminum is the most abundant metal in the Earth's crust, and the third most abundant element overall, after oxygen and silicon. But it is not found free in nature. Although aluminium is a common and widespread element, not all aluminium minerals are economically good sources of the metal.

Almost all metallic aluminium is produced from the ore bauxite. Bauxite occurs as a weathering product of low iron and silica bedrock in tropical climatic conditions. In 2017, most bauxite was mined in Australia, China, Guinea, and India.

Aluminium production is highly energy-consuming, and so the producers tend to locate smelters in places where electric power is both plentiful and inexpensive. As of 2012, the world's largest smelters of aluminium are located in China, Russia, Bahrain, United Arab Emirates, and South Africa.

Aluminium was once considered a precious metal that was even more valuable than gold. This is no longer true because, as technology improved, it became cheaper and easier to make pure metal. 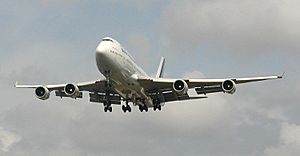 147,000 pounds of aluminum are used in building a single Boeing 747 airplane

Many things are made of aluminum. Much of it is used in overhead power lines. It is also widely used in window frames and aircraft bodies. It is found at home as saucepans, soft drink cans, and cooking foil. Aluminium is also used to coat car headlamps and compact discs.

Aluminium compounds are used in deodorants, water processing plants, food additives, and antacids. Aluminum helps us get from place to place since it's a part of cars, trucks, airplanes, bicycles, rockets, and more. 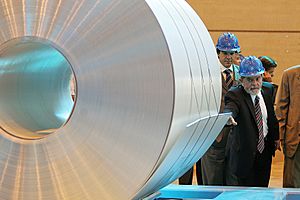 A roll of aluminium

When aluminum is combined with Fe2O3 in the right quantity thermite can be made. Thermite burns very quickly and with extreme heat. Aluminum is one of the primary components of the fuel that propels rockets into space. 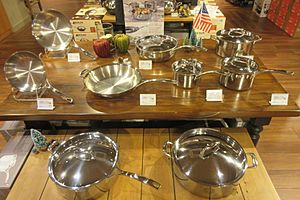 In most people, aluminium is not as toxic as heavy metals. Aluminium is classified as a non-carcinogen by the United States Department of Health and Human Services. The metal is protected by a surface layer of aluminum oxide. This surface layer forms at once when the metal is exposed to air, and is very stable. So dishes, pots, and pans can be made of aluminum, and aluminum foil can be used for packing sensitive foods.

However, acidic foods, such as tomatoes, can dissolve the surface oxide layer and some of the aluminum underneath. This isn't dangerous and doesn't affect the strength of the aluminum object, but can lead to off tastes in the food, which is why it is usually not recommended to cook acidic foods in aluminum cookware.

Aluminium is not used in the human body, although it is very common. Excessive consumption of antacids, antiperspirants, vaccines, and cosmetics provide significant exposure levels.

Exposure to powdered aluminium or aluminium welding fumes can cause pulmonary fibrosis. Fine aluminium powder can ignite or explode, posing another workplace hazard.

Recovery of the metal through recycling has become an important task of the aluminium industry. Recycling was a low-profile activity until the late 1960s, when the growing use of aluminium beverage cans brought it to public awareness.

All content from Kiddle encyclopedia articles (including the article images and facts) can be freely used under Attribution-ShareAlike license, unless stated otherwise. Cite this article:
Aluminium Facts for Kids. Kiddle Encyclopedia.