Piccadilly Circus is a road junction and public space of London's West End in the City of Westminster. It was built in 1819 to connect Regent Street with Piccadilly. In this context, a circus, from the Latin word meaning "circle", is a round open space at a street junction.

The Circus now connects Piccadilly, Regent Street, Shaftesbury Avenue, the Haymarket, Coventry Street (onwards to Leicester Square) and Glasshouse Street. It is close to major shopping and entertainment areas in the West End. Its status as a major traffic junction has made Piccadilly Circus a busy meeting place and a tourist attraction in its own right. The Circus is particularly known for its video display and neon signs mounted on the corner building on the northern side, as well as the Shaftesbury Memorial Fountain and statue of Anteros (which is popularly, though mistakenly, believed to be of Eros).

It is surrounded by several notable buildings, including the London Pavilion and Criterion Theatre. Underneath the plaza is Piccadilly Circus Underground station, part of the London Underground system. It is similar to New York City's Times Square. 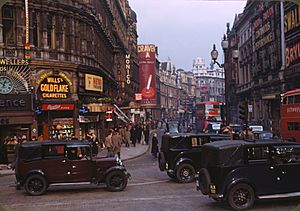 Piccadilly Circus in 1896, with a view towards Leicester Square via Coventry Street. London Pavilion is on the left, and Criterion Theatre on the right. 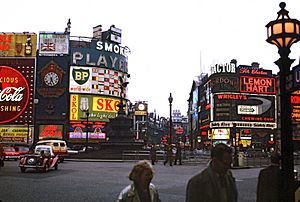 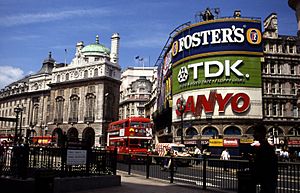 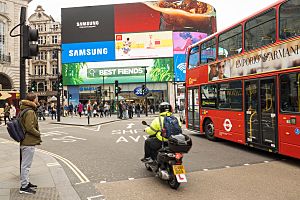 Piccadilly Circus connects to Piccadilly, a thoroughfare whose name first appeared in 1626 as Piccadilly Hall, named after a house belonging to one Robert Baker, a tailor famous for selling piccadills, or piccadillies, a term used for various kinds of collars. The street was known as Portugal Street in 1692 in honour of Catherine of Braganza, the queen consort of King Charles II of England but was known as Piccadilly by 1743. Piccadilly Circus was created in 1819, at the junction with Regent Street, which was then being built under the planning of John Nash on the site of a house and garden belonging to a Lady Hutton. Around 1858 it was briefly known as Regent's Circus. The circus lost its circular form in 1886 with the construction of Shaftesbury Avenue.

The junction has been a very busy traffic interchange since construction, as it lies at the centre of Theatreland and handles exit traffic from Piccadilly, which Charles Dickens, Jr. described in 1879: "Piccadilly, the great thoroughfare leading from the Haymarket and Regent-corner, is the nearest approach to the Parisian boulevard of which London can boast."

The Piccadilly Circus tube station was opened 10 March 1906, on the Bakerloo line, and on the Piccadilly line in December of that year. In 1928, the station was extensively rebuilt to handle an increase in traffic. The junction's first electric advertisements appeared in 1910, and, from 1923, electric billboards were set up on the façade of the London Pavilion. Traffic lights were first installed on 3 August 1926.

During World War II many servicemen's clubs in the West End served American soldiers based in Britain.

At the start of the 1960s, it was determined that the Circus needed to be redeveloped to allow for greater traffic flow. In 1962, Lord Holford presented a plan which would have created a "double-decker" Piccadilly Circus; the upper deck would have been an elevated pedestrian concourse linking the buildings around the perimeter of the Circus, with the lower deck being solely for traffic, most of the ground-level pedestrian areas having been removed to allow for greater vehicle flow. This concept was kept alive throughout the rest of the 1960s. A final scheme in 1972 proposed three octagonal towers (the highest 240 feet (73 m) tall) to replace the Trocadero, the Criterion and the "Monico" buildings. The plans were permanently rejected by Sir Keith Joseph and Ernest Marples; the key reason given was that Holford's scheme only allowed for a 20% increase in traffic, and the Government required 50%.

The Holford plan is referenced in the short-form documentary film "Goodbye, Piccadilly", produced by the Rank Organisation in 1967 as part of their Look at Life series when it was still seriously expected that Holford's recommendations would be acted upon. Piccadilly Circus has since escaped major redevelopment, apart from extensive ground-level pedestrianisation around its south side in the 1980s.

The Shaftesbury Memorial Fountain in Piccadilly Circus was erected in 1893 to commemorate the philanthropic works of Anthony Ashley Cooper, 7th Earl of Shaftesbury. During the Second World War, the statue atop the Shaftesbury Memorial Fountain was removed and was replaced by advertising hoardings. It was returned in 1948. When the Circus underwent reconstruction work in the late 1980s, the entire fountain was moved from the centre of the junction at the beginning of Shaftesbury Avenue to its present position at the southwestern corner.

Piccadilly Circus is surrounded by several major tourist attractions, including the Shaftesbury Memorial, Criterion Theatre, London Pavilion and several major retail stores. Numerous nightclubs, restaurants and bars are located in the area and neighbouring Soho, including the former Chinawhite club. 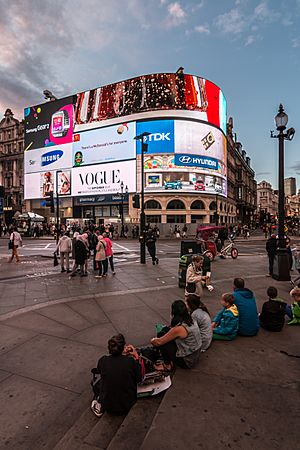 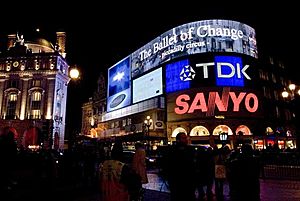 The Ballet of Change: Piccadilly Circus screening on the Coca-Cola Billboard, 2007

Piccadilly Circus was surrounded by illuminated advertising hoardings on buildings, starting in 1908 with a Perrier sign, but only one building now carries them, the one in the northwestern corner between Shaftesbury Avenue and Glasshouse Street. The site is unnamed (usually referred to as "Monico" after the Café Monico, which used to be on the site); its addresses are 44/48 Regent Street, 1/6 Sherwood Street, 17/22 Denman Street and 1/17 Shaftesbury Avenue, and it has been owned by property investor Land Securities Group since the 1970s.

The earliest signs used incandescent light bulbs; these were replaced with neon lights and with moving signs (there was a large Guinness clock at one time). The first Neon sign was for the British meat extract Bovril. From December 1998, digital projectors were used for the Coke sign, the square's first digital billboard, while in the 2000s there was a gradual move to LED displays, which completely replaced neon lamps by 2011. The number of signs has reduced over the years as the rental costs have increased.

During 2017, the current six advertising screens will be combined into one large ultra-high definition curved Daktronics display, turning the signs off during renovation for the longest time since the 1940s. The current signs were switched off on 16 January 2017, with the new screen expected to take their place in the autumn.

As of 2016, the site has six LED advertising screens above three large retail units facing Piccadilly Circus on the north side, occupied by Boots, Gap and a mix of smaller retail, restaurant and office premises fronting the other streets. A Burger King located under the Samsung advert, which had been a Wimpy Bar until 1989, closed in early 2008 and was converted into a Barclays Bank.

On special occasions the lights are switched off, such as the deaths of Winston Churchill in 1965 and Diana, Princess of Wales in 1997. On 21 June 2007, they were switched off for one hour as part of the Lights Out London campaign.

Other companies and brands that have had signs on the site were Bovril, Volkswagen, Max Factor, Wrigley's Spearmint, Skol, Air India and Gold Flake (as Will's Gold Flake Cigarettes).

Shaftesbury Memorial and the statue of Anteros 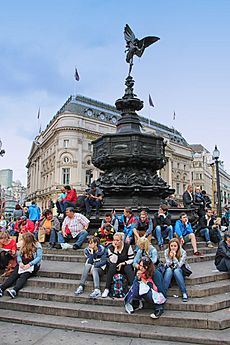 Tourists sitting on the steps of the Shaftesbury Memorial Fountain

At the southeastern side of the Circus, moved after World War II from its original position in the centre, stands the Shaftesbury Memorial Fountain, erected in 1892–1893 to commemorate the philanthropic works of Lord Shaftesbury, a Victorian politician, philanthropist and social reformer. The subject of the Memorial is the Greek god Anteros and was given the name The Angel of Christian Charity but is generally mistaken for his brother Eros.

The Criterion Theatre, a Grade II* listed building, stands on the south side of Piccadilly Circus. Apart from the box office area, the entire theatre, with nearly 600 seats, is underground and is reached by descending a tiled stairway. Columns are used to support both the dress circle and the upper circle, restricting the views of many of the seats inside.

The theatre was designed by Thomas Verity and opened as a theatre on 21 March 1874, although original plans were for it to become a concert hall. In 1883, it was forced to close to improve ventilation and to replace gaslights with electric lights and was reopened the following year. The theatre closed in 1989 and was extensively renovated, reopening in October 1992.

On the northeastern side of Piccadilly Circus, on the corner between Shaftesbury Avenue and Coventry Street, is the London Pavilion. The first building bearing the name was built in 1859 and was a music hall. In 1885, Shaftesbury Avenue was built through the former site of the Pavilion, and a new London Pavilion was constructed, which also served as a music hall. In 1924 electric billboards were erected on the side of the building. 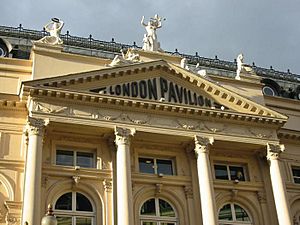 Facade of the London Pavilion in 2002

The former Swan & Edgar department store on the west side of the circus between Piccadilly and Regent Street was built in 1928–29 to a design by Reginald Blomfield. Since the closure of the department store in the early 1980s, the building has been successively the flagship London store of music chains Tower Records, Virgin Megastore and Zavvi. The current occupier is clothing brand The Sting.

Lillywhites is a major retailer of sporting goods located on the corner of the circus and Lower Regent Street, next to the Shaftesbury fountain. It moved to its present site in 1925. Lillywhites is popular with tourists, and they regularly offer sale items, including international football jerseys up to 90% off. Nearby Fortnum & Mason is often considered to be part of the Piccadilly Circus shopping area and is known for its expansive food hall.

Underground station and the Bakerloo and Piccadilly lines 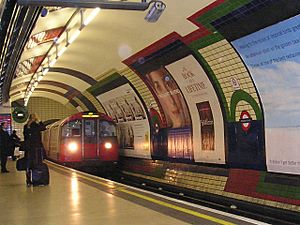 The Piccadilly Circus station on the London Underground is located directly beneath Piccadilly Circus itself, with entrances at every corner. It is one of the few stations which have no associated buildings above ground and is fully underground. The below ground concourse and subway entrances are Grade II listed.

The station is on the Piccadilly line between Green Park and Leicester Square, and the Bakerloo line between Charing Cross and Oxford Circus.

The Circus' status as a high-profile public space has made it the destination for numerous political demonstrations, including the February 15, 2003 anti-war protest and the "Carnival Against Capitalism" protest against the 39th G8 summit in 2013. 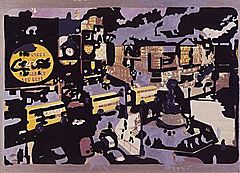 The phrase it's like Piccadilly Circus is commonly used in the UK to refer to a place or situation which is extremely busy with people. It has been said that a person who stays long enough at Piccadilly Circus will eventually bump into everyone they know. Probably because of this connection, during World War II, "Piccadilly Circus" was the code name given to the Allies' D-Day invasion fleet's assembly location in the English Channel.

All content from Kiddle encyclopedia articles (including the article images and facts) can be freely used under Attribution-ShareAlike license, unless stated otherwise. Cite this article:
Piccadilly Circus Facts for Kids. Kiddle Encyclopedia.