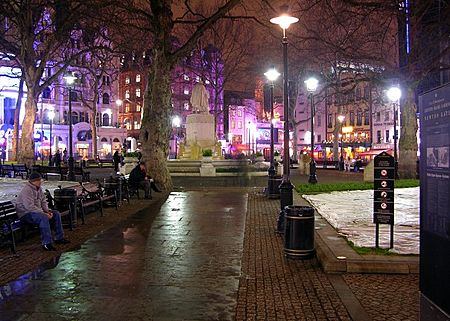 Leicester Square at night in December 2005: a view towards the northeast corner.

Leicester Square (pronounced "Lester" Square) is a pedestrianised square in the West End of London in the City of Westminster.

It about equal distances (about 400 yards or 370 metres) east of Piccadilly Circus,and west of Covent Garden. Nearby to the south is the much larger Trafalgar Square.

Prompted by the growth in tourism, Leicester Square was pedestrianised in the late 20th century. It is notable for its cinemas and nightclubs. 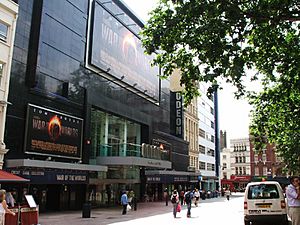 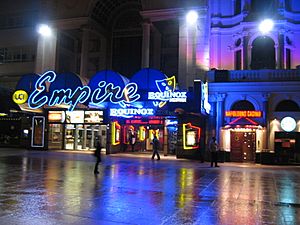 Leicester Square's Empire on a rainy night in May 2003

All content from Kiddle encyclopedia articles (including the article images and facts) can be freely used under Attribution-ShareAlike license, unless stated otherwise. Cite this article:
Leicester Square Facts for Kids. Kiddle Encyclopedia.