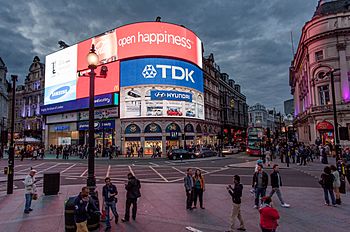 Piccadilly Circus, the heart of the West End

The West End of London (commonly referred to as the West End) is an area of Central and West London containing many of the city's major tourist attractions, shops, businesses, government buildings and entertainment venues, including the West End theatres.

Use of the term began in the early 19th century to describe fashionable areas to the west of Charing Cross. The West End covers much of the boroughs of Westminster and Camden.

While the City of London, or the Square Mile, is the main business and financial district in London, the West End is the main commercial and entertainment centre of the city. It is the largest central business district in the United Kingdom, comparable to Midtown Manhattan in New York City, the Gangnam District in Seoul, Shibuya in Tokyo, Sol in Madrid or the 8th arrondissement in Paris and EUR in Rome. It is one of the most expensive locations in the world in which to rent office space, just behind Silicon Valley's Sand Hill Road. 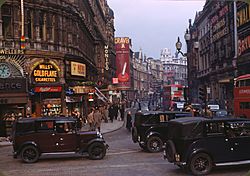 Shaftesbury Avenue from Piccadilly Circus in 1949

Lying to the west of the historic Roman and Medieval City of London, the West End was long favoured by the rich elite as a place of residence because it was usually upwind of the smoke drifting from the crowded City. It was also close to the royal seat of power at Westminster, and is largely contained within the City of Westminster (one of the 32 London boroughs).

Developed in the 17th, 18th and 19th centuries, it was originally built as a series of palaces, expensive town houses, fashionable shops and places of entertainment. The areas closest to the City around Holborn, Seven Dials, and Covent Garden historically contained poorer communities that were cleared and redeveloped in the 19th century.

As the West End is a term used colloquially by Londoners and is not an official geographical or municipal definition, its exact constituent parts are up for debate. Westminster City Council's 2005 report Vision for the West End included the following areas in its definition of the West End: Covent Garden, Soho, Chinatown, Leicester Square, the shopping streets of Oxford Street, Regent Street and Bond Street, the area encompassing Trafalgar Square, the Strand and Aldwych, and the district known as Theatreland. The Edgware Road to the north-west and the Victoria Embankment to the south-east were also covered by the document but were treated as "adjacent areas" to the West End.

According to Ed Glinert's West End Chronicles (2006) the districts falling within the West End are Mayfair, Soho, Covent Garden, Fitzrovia and Marylebone. By this definition, the West End borders Temple, Holborn and Bloomsbury to the east, Regent's Park to the north, Paddington, Hyde Park and Knightsbridge to the west, and Victoria and Westminster to the south.

One of the local government wards within the City of Westminster is called "West End". This covers a similar area that defined by Glinert: Mayfair, Soho, and parts of Fitzrovia and Marylebone. The population of this ward at the 2011 Census was 10,575. 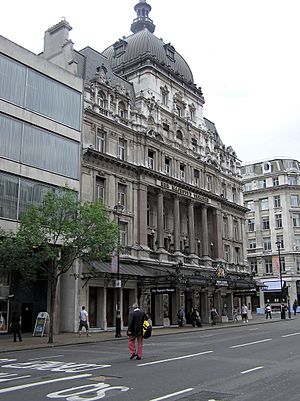 Her Majesty's Theatre in Haymarket, home to Andrew Lloyd Webber’s The Phantom of the Opera

The annual New Year's Day Parade takes place on the streets of the West End. 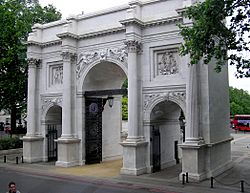 The West End is laid out with many notable public squares and circuses, the latter being the original name for roundabouts in London.

London Underground stations in the West End include:

All content from Kiddle encyclopedia articles (including the article images and facts) can be freely used under Attribution-ShareAlike license, unless stated otherwise. Cite this article:
West End of London Facts for Kids. Kiddle Encyclopedia.