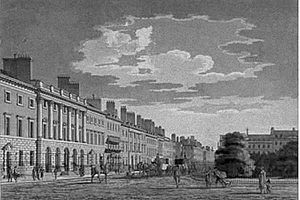 The north side of Grosvenor Square in the 18th or early 19th century. The three houses at the far left form a unified group, but the others on this side are individually designed. Most later London squares would be more uniform.

Grosvenor Square is a large garden square in the exclusive Mayfair district of London, England. It is the property of the Duke of Westminster. There is a 9/11 memorial and statues of American presidents like Franklin D. Roosevelt and Ronald Reagan. Grosvenor Square is the location of the American embassy in England.

All content from Kiddle encyclopedia articles (including the article images and facts) can be freely used under Attribution-ShareAlike license, unless stated otherwise. Cite this article:
Grosvenor Square Facts for Kids. Kiddle Encyclopedia.