Embassy of the United States, London facts for kids 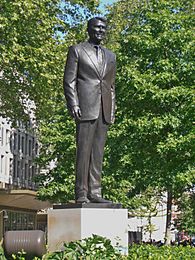 Statue of Ronald Reagan outside the embassy

Security barriers outside the Embassy in 2006

The American embassy in London was first situated in Great Cumberland Place, later moving to Piccadilly, Portland Place and Grosvenor Gardens. In 1938, the embassy was moved to 1 Grosvenor Square (Macdonald House) (which now hosts part of the Canadian High Commission). During this time, Grosvenor Square began to accommodate many U.S. government offices, including the headquarters of General Dwight D. Eisenhower and the European headquarters of the United States Navy. Following World War II, the Duke of Westminster donated land for a memorial to wartime President Franklin D. Roosevelt.

The American Embassy London Chancery Building was constructed in the late 1950s, opening in 1960. It was designed by Finnish American modernist architect Eero Saarinen. The building has nine storeys, three of which are below ground. A large gilded aluminum bald eagle by Theodore Roszak, with a wingspan of over 11 metres (35 feet) is situated on the roof of the Chancery Building, making it a recognizable London landmark. In October 2009, the building was granted Grade II listed status.

In March 1968, a crowd of some 10,000 demonstrated at Trafalgar Square against US involvement in the Vietnam War, before marching to Grosvenor Square. The Metropolitan Police had attempted to cordon off part of the square nearest to the embassy and there was violence as the crowd broke through the police line. Police horses were used to regain control. 200 demonstrators were arrested and 50 people needed hospital treatment including 25 police officers, one of them with a serious spinal injury. In October of the same year, during a demonstration organised by the Vietnam Solidarity Campaign, a splinter group of 6,000 Maoists returned to the square. A thousand police officers formed a cordon that the protesters failed to breach and remained relatively peaceful until the crowd began to disperse when there was disorder in the neighbouring streets.

Security at the embassy was tightened in the 1980s and 1990s following successive terrorist attacks on U.S. embassies and consulates worldwide. However, it was after the September 11 attacks in 2001 that security was significantly increased. A massive security operation at the embassy has seen one side of Grosvenor Square closed to public access by car, and armed roadblocks are stationed outside the building. On August 29, 2002, Kerim Chatty, a Swedish citizen of Tunisian descent, was arrested at the Stockholm-Västerås Airport trying to board a Ryanair Flight 685 destined for London Stansted Airport with a loaded gun in his luggage. Anonymous intelligence sources cited in the media claimed that the man was planning to hijack the aircraft and crash it into the United States embassy in London, using the rooftop eagle to identify it from the air. Sweden's Security Service, Säpo, denied the claims and called the reports "false information". The man was subsequently cleared of all terrorism-related charges.

The security threat against the embassy prompted the U.S. government to consider moving the embassy. Several British media outlets reported that the U.S. government had wished to use Kensington Palace as their embassy, which had allegedly had been vetoed by Queen Elizabeth II, as several members of the British Royal Family have their residences there. The embassy "strenuously denied" the reports, and a spokesman for Buckingham Palace reported that no formal request had been made. Another possible option was Chelsea Barracks, for which the U.S. Embassy put in an unsuccessful bid in February 2007. 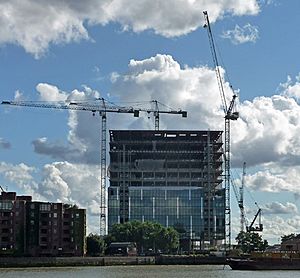 During construction of the new Embassy in Nine Elms.

On October 8, 2008, the Embassy announced a conditional agreement with the real estate developer Ballymore to purchase property for a new Embassy site in the Nine Elms area of the London Borough of Wandsworth, south of the River Thames. The site lies within the Vauxhall/Nine Elms/Battersea Opportunity Area as set out in the London Plan. The proposed plan would only go forward if approved by the United States Congress and by the local planning authority. The Northern line extension to Battersea will have new stations at Battersea and Nine Elms—combined with major local development. The United States Department of State announced in January 2009 that it was choosing among nine architectural firms, all "modern" and "upmarket", to replace the ageing embassy headquarters. In March 2009 the U.S. Department of State's Bureau of Overseas Buildings Operations announced that four architectural firms had been selected for the final phase of the design competition. By law, the architect for a U.S. embassy must be an American firm with "numerous security clearances".

In November 2009, the U.S. government conditionally agreed to sell the Grosvenor Square Chancery Building to Qatari real-estate investment firm Qatari Diar, which in 2007 purchased the Chelsea Barracks. Though the price was undisclosed, the building's worth was estimated at £500 million in July 2000. The development value of the property was reduced when the building was given Grade II listed status, requiring developers to maintain its current design. The building is now one of Mayfair's 238 listed buildings and monuments. In 2016 plans were approved for the conversion of the building into a hotel.

On February 23, 2010, the U.S. government announced that a team led by the firm of KieranTimberlake had won the competition to design the new embassy building and surrounding green spaces. The winning design resembles a crystalline cube, with a semi-circular pond on one side (called a "moat" by The Times) and surrounded by extensive public green spaces.

Matthew Barzun was sworn in as the United States Ambassador to the Court of St. James's on August 15, 2013, by U.S. Secretary of State John Kerry. He took up his duties in London on August 23, 2013 and presented his credentials to Foreign Secretary William Hague on August 27, 2013. Barzun left office in January 2017, immediately before the swearing-in of President Trump. Trump intends to nominate Woody Johnson for United States Ambassador to the United Kingdom.

There are also American consulates general in Belfast and Edinburgh, a Welsh Affairs Office in Cardiff, and a contact centre Glasgow.

All content from Kiddle encyclopedia articles (including the article images and facts) can be freely used under Attribution-ShareAlike license, unless stated otherwise. Cite this article:
Embassy of the United States, London Facts for Kids. Kiddle Encyclopedia.