Those who at the time are entitled to the style His or Her Royal Highness (HRH), and any styled His or Her Majesty (HM), are normally considered members, including those so styled before the beginning of the current monarch's reign. By this criterion, a list of the current royal family will usually include the monarch, the children and male-line grandchildren of the monarch and previous monarchs, the children of the eldest son of the Prince of Wales, and all their current or widowed spouses.

Some members of the royal family have official residences named as the places from which announcements are made in the Court Circular about official engagements they have carried out. The state duties and staff of some members of the royal family are funded from a parliamentary annuity, the amount of which is fully refunded by the Queen to the Treasury.

Since 1917, when King George V changed the name of the royal house from Saxe-Coburg and Gotha, members of the royal family belong, either by birth or by marriage, to the House of Windsor. Senior titled members of the royal family do not usually use a surname, although since 1960 Mountbatten-Windsor, incorporating Prince Philip's adopted surname of Mountbatten, has been prescribed as a surname for Elizabeth II's direct descendants who do not have royal styles and titles, and it has sometimes been used when required for those who do have such titles. In 2014 the royal family were regarded as British cultural icons, with young adults from abroad naming the family among a group of people that they most associated with UK culture. 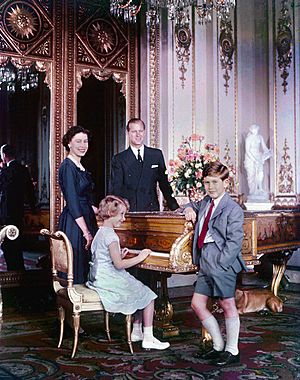 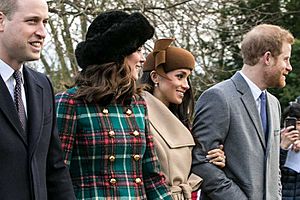 This is a list of members of the royal family as of 2018[update]:

There are a few immediate family members (a spouse and the children and grandchildren of its current full or deceased members) using no royal style who sometimes appear in listings:

In other Commonwealth realms

As the royal family is shared by other Commonwealth realms, its members will often also conduct official and non-official duties outside the United Kingdom, on behalf of the relevant state.

All content from Kiddle encyclopedia articles (including the article images and facts) can be freely used under Attribution-ShareAlike license, unless stated otherwise. Cite this article:
British Royal Family Facts for Kids. Kiddle Encyclopedia.