Today, the State Rooms are open to the public and managed by the independent charity Historic Royal Palaces, a nonprofit organisation that does not receive public funds. The offices and private accommodation areas of the Palace remain the responsibility of the Royal Household and are maintained by the Royal Household Property Section. The palace also displays many paintings and other objects from the Royal Collection. 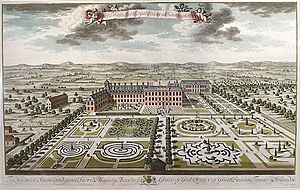 Kensington Palace was originally a two-storey Jacobean mansion built by Sir George Coppin in 1605 in the village of Kensington. The mansion was purchased in 1619 by Heneage Finch, 1st Earl of Nottingham and was then known as Nottingham House. Shortly after William and Mary assumed the throne as joint monarchs in 1689, they began searching for a residence better suited for the comfort of the asthmatic William, as Whitehall Palace was too near the River Thames, with its fog and floods, for William's fragile health.

In the summer of 1689, William and Mary bought Nottingham House from Secretary of State Daniel Finch, 2nd Earl of Nottingham for £20,000. They then instructed Sir Christopher Wren, Surveyor of the King's Works to begin an immediate expansion of the house. In order to save time and money, Wren kept the structure intact and added a three-storey pavilion at each of the four corners, providing more accommodation for the King and Queen and their attendants. 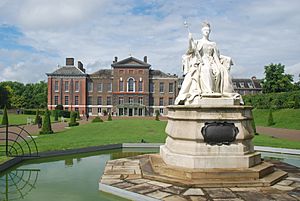 The palace was surrounded by straight cut solitary lawns, and formal stately gardens, laid out with paths and flower beds at right angles, after the Dutch fashion. The royal court took residence in the palace shortly before Christmas 1689, and for the next seventy years, Kensington Palace was the favoured residence of British monarchs, although the official seat of the Court was and remains at St. James's Palace, which has not been the actual royal residence in London since the 17th century.

Additional improvements soon after included Queen Mary's extension of her apartments by building the Queen's Gallery and, after a fire in 1691, the King's Staircase was rebuilt in marble and a Guard Chamber was constructed, facing the foot of the stairs. 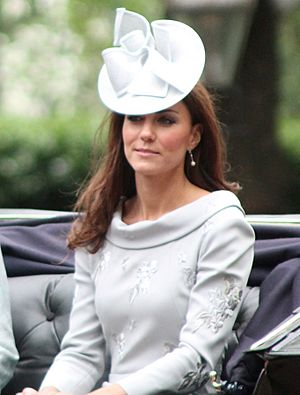 On 6 November 2011, it was announced that the Duke and Duchess of Cambridge would move from their temporary residence of Nottingham Cottage on the Kensington Palace grounds, to the four-storey, 20-room Apartment 1A, formerly the residence of Princess Margaret. Renovations took 18 months at a cost of £4.5 million. The building costs included new heating, electrics and plastering, and the removal of asbestos that required nearly everything to be stripped out internally, as well as a new roof.

On 28 March 2012, it was announced that Prince Harry had moved his residence from Clarence House to a one-bedroom apartment at Kensington Palace. The announcement of Prince Harry's engagement to Meghan Markle included a statement that the couple would live in Nottingham Cottage after their May 2018 wedding until the birth of their first child in Spring 2019. 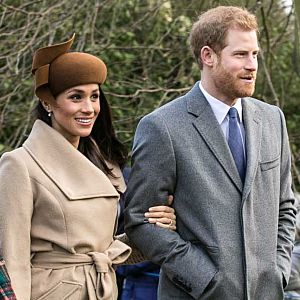 Kensington Palace as a tourist attraction 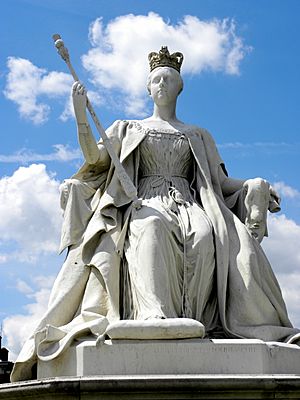 By the end of the 19th century, the State Rooms were severely neglected. The brickwork was decaying and the woodwork was infested with dry rot. Calls were made for the palace to be demolished, but Queen Victoria declared that "while she lived, the palace in which she was born should not be destroyed". In 1897, Parliament was persuaded to pay for the restoration which was completed two years later.

The State Rooms were opened to the public on the Queen's birthday, 24 May 1899. This began the palace's dual role as a private home to royalty and a public museum. Queen Mary was instrumental in opening the State Apartments as a temporary location for the London Museum (now known as the Museum of London) from 1911 to 1914.

The State Apartments were filled with showcases, some containing hundreds of objects including 18th-century costumes and dresses worn by Queen Victoria, Queen Alexandra and Queen Mary. The museum returned from 1950 to 1976 before it moved to its permanent home on London Wall. 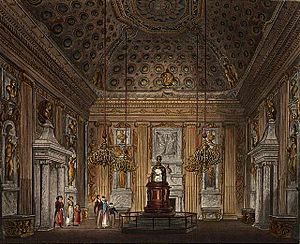 The Kensington Palace State Rooms underwent a two-year, £12 million renovation. The re-opening of the palace occurred in time for the Diamond Jubilee of Queen Elizabeth II in 2012.

Visitors now can choose four different routes throughout the palace that offer exhibits incorporating cutting-edge digital presentations, interactive experiences, and even audio sequences that bring to life the gatherings of gowns, antique furniture, and other memorabilia of notable residents of the palace including William and Mary in the Queen's State Apartments, the court of George I and II in the King's State Apartments and the life of Queen Victoria in the rooms most associated with her. 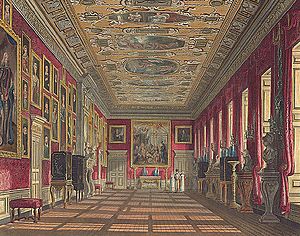 The King's Gallery at Kensington Palace

The fourth exhibit displays selections of Queen Elizabeth's wardrobe in the 1950s, Princess Margaret from the 1960 and 70s and Diana, Princess of Wales in the 1980s during their fashion heyday. The grounds of the palace were also renovated with enhancements including eliminating railings, fences, and shrubs. Two new public gardens to the south and east of the palace were installed that connect the property to Kensington Gardens.

All content from Kiddle encyclopedia articles (including the article images and facts) can be freely used under Attribution-ShareAlike license, unless stated otherwise. Cite this article:
Kensington Palace Facts for Kids. Kiddle Encyclopedia.