Lady Sarah Frances Elizabeth Chatto (née Armstrong-Jones; born 1 May 1964) is a member of the extended British royal family. She is the only daughter of Princess Margaret, Countess of Snowdon, and Antony Armstrong-Jones, 1st Earl of Snowdon, and a niece of Queen Elizabeth II. At the time of her birth she was seventh in line of succession to the British throne and is currently 24th.

Sarah Armstrong-Jones was born on 1 May 1964 at Kensington Palace in London. She was christened in the private chapel at Buckingham Palace on 13 July 1964. Her godmothers were Prudence, Lady Penn (née Stewart-Wilson), stepsister of Jocelyn Stevens; Jane Stevens, the wife of Jocelyn Stevens and one of Princess Margaret's ladies-in-waiting; and Marigold Bridgeman. Her godfathers were David Fane, 15th Earl of Westmorland, and her father's friend Antony Barton.

Lady Sarah is herself a godmother to Prince Harry, Duke of Sussex, Lady Rose Gilman, and Lady Louise Windsor.

Lady Sarah and her brother, then Viscount Linley, grew up in the nursery of Kensington Palace, Apartment 1a. They were raised with a nanny called Verona Sumner, although their parents, most especially their father, were comparatively hands-on (for the time), with their father teaching them to build things and be creative. They spent weekends, depending on with which parent, at either Nymans or Royal Lodge. Holidays were given to the royal estates at Sandringham and Balmoral, where Lady Sarah did a lot of landscape painting.

Lady Sarah was a bridesmaid at the wedding of Charles, Prince of Wales, and Lady Diana Spencer. She accompanied her mother, Princess Margaret, and brother David, Viscount Linley, on an official visit to China and Hong Kong in May 1987.

She attended Bedales School, which she left with a single A level in Art. She enrolled at the Camberwell School of Art. After her studies there, she took a two-year sabbatical to travel with her father to India, where he was employed to photograph the production of A Passage to India. The film's producer, John Knatchbull, 7th Baron Brabourne, gave her a job as an intern, assisting the wardrobe department (without credit) and studying wood gilding under her father's cousin Thomas Messel. Returning to England, she enrolled at Middlesex Polytechnic (renamed as Middlesex University since 1992).

She is a professional painter, represented by The Redfern Gallery. From 9 December 2015 to 23 April 2016, the Redfern Gallery exhibited "recent paintings and drawings" by "Sarah Armstrong-Jones."

She has been exhibiting her work, always under the name of "Sarah Armstrong-Jones," at the Redfern Gallery since 1995. Her work has won awards: The Windsor & Newton Prize in 1988 and The Creswick Landscape Prize in 1990.

She is vice-president of The Royal Ballet, an appointment she accepted in 2004, following the example of her late mother, who was also a patron of the Royal Ballet until her death two years before. 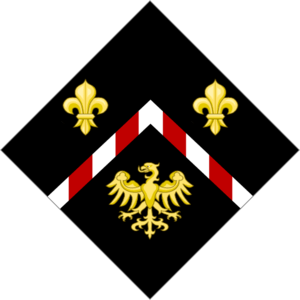 The arms of Lady Sarah, being her father's borne on a lozenge.

Lady Sarah met Daniel Chatto during her sabbatical in India with her father in the 1980s. He was also working on a film, albeit a different film—Heat and Dust. Chatto proposed to her with a "vintage cluster ring." She married Chatto on 14 July 1994, the marriage being officiated by the Reverend Chad Varah at St Stephen's, Walbrook, in the City of London. The bride's wedding gown was designed by Jasper Conran. The Snowdon Floral Tiara which is made out of three brooches secured her veil. Her bridesmaids were Lady Frances Armstrong-Jones, Zara Phillips (daughter of her cousin Anne, Princess Royal), and Tara Noble. The couple have two sons:

All content from Kiddle encyclopedia articles (including the article images and facts) can be freely used under Attribution-ShareAlike license, unless stated otherwise. Cite this article:
Lady Sarah Chatto Facts for Kids. Kiddle Encyclopedia.