House of Windsor facts for kids 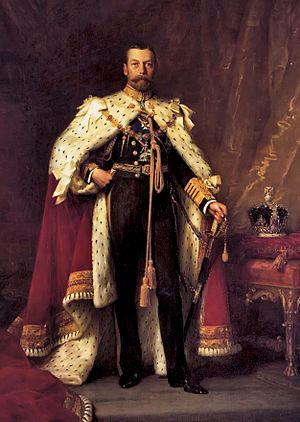 George V of the united Kingdom

Queen Victoria married Prince Albert, son of Duke Ernst I of Saxe-Coburg and Gotha. Therefore her descendants are members of the ducal family of Saxe-Coburg and Gotha with the house name of Wettin. Victoria's son Edward VII and his son George V reigned as members of this house. But during World War I there was a lot of hatred of anything German. A lot of this feeling was stirred up by newspapers. People with German names were beaten up, and shops with German names had their windows broken. Even the Royal Family were accused of supporting Germany. On 17 July 1917 George V ordered the Royal Family to give up their German titles, and change German-sounding titles and house names for English-sounding versions. Prince Louis Battenberg became Lord Louis Mountbatten. The Duke of Teck became the Marquis of Milford Haven and the name of the royal house, and the royal surname was changed to Windsor, after the town of Windsor and Windsor Castle.

When he heard about the change of name, German Emperor William II joked that he wanted to see Shakespeare's play The Merry Wives of Saxe-Coburg-Gotha.

In April 1952, Queen Elizabeth II said that her descendants will keep name and House of Windsor, the House of Schleswig-Holstein-Sonderburg-Glücksburg through their father, born Prince Philip of Greece and Denmark, a line of the House of Oldenburg.

On 8 February 1960, the Queen decided instead to keep the House and Family of Windsor but that their personal surname is "Mountbatten-Windsor". Mountbatten is the surname adopted by Prince Philip before his marriage, an anglicization of his mother's family name of Battenberg.

The next in line for the throne is Prince Charles, if so he may be known as King Charles III.

All content from Kiddle encyclopedia articles (including the article images and facts) can be freely used under Attribution-ShareAlike license, unless stated otherwise. Cite this article:
House of Windsor Facts for Kids. Kiddle Encyclopedia.