The Duchess of Kent gained attention for her conversion to Catholicism in 1994, the first member of the Royal Family to convert publicly since the passing of the Act of Settlement 1701. The Duchess of Kent is strongly associated with the world of music, and has performed as a member of several choirs.

Katharine did not receive any formal education until the age of 10. She was educated at Queen Margaret's School, York, and at Runton Hill School in North Norfolk. At school she was introduced to music, and was taught to play the piano, organ and violin, which she still plays today. In her final year at Runton Hill, she was formally elected music secretary; in this role, she organized school recitals in Norwich. She left school with a pass in oral French and a "very good" in English literature.

The Duchess has stated her admiration for the late cellist Jacqueline du Pré in the documentary by Christopher Nupen called 'Who is Jacqueline du Pré?' She later worked for some time in a children's home in York and worked at a nursery school in London. She failed to gain admission to the Royal Academy of Music, but followed her brothers to Oxford – where they were at the University – to study at Miss Hubler's Finishing School, 22 Merton Street, devoting much of her time to music. At Miss Hubler's, she was one of only eight pupils and was instructed by three different teachers: The principal herself, Miss Hubler, taught French literature, painting, and history; a French woman taught cookery; and a Viennese lady taught music.

Katharine met Prince Edward, Duke of Kent, the eldest son of Prince George, Duke of Kent, and Princess Marina of Greece and Denmark, while he was based at Catterick Camp. Edward proposed to her with a ring consisting of "an oval sapphire with a round diamond on either side." On 8 June 1961, the couple married at York Minster, the first royal marriage in that location in 633 years (the last one being between Edward III and Philippa of Hainault). The bride's father escorted her, and the best man was Prince Michael of Kent. Princess Anne was one of the bridesmaids. The Archbishop of York Michael Ramsey conducted the marriage service. Guests included actors Noël Coward and Douglas Fairbanks Jr. as well as members of the British, Greek, Danish, Norwegian, Yugoslavian, Romanian and Spanish royal families. 273 yards of fabric were used to make her white silk gauze dress which had "a high neckline and long sleeves and a commanding train," and was designed by John Cavanagh. The Kent Diamond and Pearl Fringe Tiara secured her veil.

Katharine gave birth to a stillborn son, Patrick, in 1977, a loss that caused her to fall into a state of severe depression, about which she has spoken publicly. "It had the most devastating effect on me," she told The Daily Telegraph in 1997. "I had no idea how devastating such a thing could be to any woman. It has made me extremely understanding of others who suffer a stillbirth."

The Duchess moved to the married quarters in Hong Kong and Germany while her husband was serving at the military. The couple later took numerous royal engagements on behalf of the Queen, including the Ugandan independence celebrations and the coronation of the King of Tonga.

The Duchess of Kent was received into the Catholic Church in 1994. This was a personal decision, and she received the approval of the Queen. As she explained in an interview on BBC, "I do love guidelines and the Catholic Church offers you guidelines. I have always wanted that in my life. I like to know what's expected of me. I like being told: You shall go to church on Sunday and if you don't you're in for it!" Basil Hume, then Cardinal Archbishop of Westminster and thus spiritual leader of the Catholic Church in England and Wales, warned the Church against triumphalism over the Duchess's conversion.

Since then her younger son, Lord Nicholas Windsor, her grandson, Edward Windsor, Lord Downpatrick, and her granddaughter Lady Marina Charlotte Windsor have also become Catholics. Her older son, the Earl of St Andrews, father of Lord Downpatrick, married a Catholic and thus had been excluded from the succession until the Succession to the Crown Act revoked that exclusion in 2015. The Dukedom of Kent is not subject to the Act of Settlement, so St Andrews' son and heir, Lord Downpatrick, is in line to become the first Roman Catholic Duke or Earl of Kent since the Reformation. 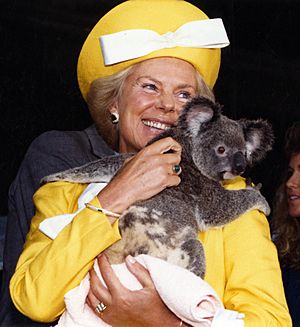 Katharine at Expo 88 in Brisbane 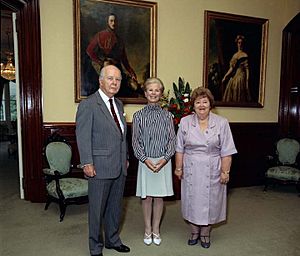 The Duchess with Sir Walter Campbell and Lady Campbell in Brisbane, 1992

In 1978, the Duchess was hospitalised for several weeks due to "nervous strain". Reports by the BBC stated that the Duchess suffered from coeliac disease and Epstein–Barr virus, whose symptoms resemble those of ME or chronic fatigue syndrome. She stepped down from her role as head of the M.E. Society in the UK, and has since energetically worked with various charities and schools.

In 1999, the Duchess of Kent was refused permission to seat the 12-year-old son of a friend in the Royal Box at the All England Lawn Tennis and Croquet Club. Alternative seating outside the box was offered. She later received what The Daily Telegraph reported in a front-page story was a "curt letter" from club chairman John Curry, reminding her that children, other than members of the royal family, were not permitted in the Royal Box. She, in turn, threatened a boycott of the Royal Box.

The Duchess of Kent decided in 2002 not to use personally the style 'Her Royal Highness' and to reduce her royal duties. Since then she has been informally known as Katharine Kent or Katharine, Duchess of Kent, although her formal style (e.g. in the Court Circular) remains HRH The Duchess of Kent. Despite her decision to stay away from public life, the Duchess continues to appear at major events including the wedding of Prince William and Catherine Middleton in 2011, and the concert at Buckingham Palace and thanksgiving service at St Paul's Cathedral during the Queen's diamond jubilee celebrations in 2012.

In December 1989, Katharine was a guest on the BBC Radio 4 programme Desert Island Discs. In keeping with her withdrawal from full royal duties in 1996, the Duchess took a position as a music teacher in Wansbeck Primary School in Kingston upon Hull. She also taught piano lessons in a rented studio flat near her official residence at Kensington Palace. The Duchess of Kent had served as the president of the Royal Northern College of Music, and was the director of National Foundation for Youth Music from 1999 to 2007. In March 2004, Katharine was the subject of Real Story on BBC One. She talked about her career as a music teacher saying "teaching [the children] is very satisfying. It's a privilege. To me it's one of the most exciting jobs anyone can do." In 2005 the Duchess spoke in an interview on BBC Radio 3 of her liking of rap music and of the singer/songwriter Dido, whose song "Thank You" she chose as one of her favourite pieces of music. She is patron of national charity, Making Music, the National Federation of Music Societies, an umbrella organisation for amateur and voluntary music groups. Katharine is among the co-founders of Future Talent, a charity that helps young children with low-income backgrounds pursue a career in music. In May 2016, she hosted a concert for young children at Buckingham Palace in her capacity as founder of Future Talent. In August 2016, the Duchess became an ambassador for Samaritans after a volunteer at the Teesside branch reached out to her. She had previously been its Royal Patron from 1971 until 1999. The Duchess is also a supporter of UNICEF.

All content from Kiddle encyclopedia articles (including the article images and facts) can be freely used under Attribution-ShareAlike license, unless stated otherwise. Cite this article:
Katharine, Duchess of Kent Facts for Kids. Kiddle Encyclopedia.