George V of the United Kingdom facts for kids

King George V was born on June 3, 1865. He was the son of Edward VII. He was in the Royal Navy when he was twelve. He left the Royal Navy to become king. George V was crowned King and Emperor of India in the year 1911. King George was married to Princess Victoria Mary of Teck. George V was King during World War One. He and his wife visited the war front regulary. He changed the family name to “Windsor" to remove any association with a German heritage, as Germany was very unpopular at this time. Among other things, he is credited for starting the Royal Christmas Broadcast tradition. A renowed stamp collector, George was also the father of King Edward VIII and the famous King George VI. A popular monarch, many people thought he was a good King. He died January 20, 1936 aged seventy. He was king for twenty-five years, eight months, and fifteen days. He is the grandfather of current Queen- Elizabeth II. 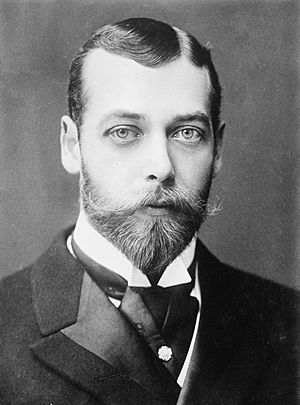 George V of the United Kingdom

George was born on June 3 1865 as the second son to the Prince and princess of Wales (Later King Edward VII and Queen Alexandra). George married his double second cousin once removed Mary of Teck (later Queen Mary) who they stayed married until his death. He was known as the Duke of York for many years until his grandmother, Victoria peacefully died at the age of 81. George's father Edward inherited the throne, gaining the nickname as Edward the peaceful for his hard work in maintaing stability at a time when festering tensions were increasing. His death was granted with huge sadness across the empire with George describing him as "my best friend". By the time George became King, Britain was the richest, most powerful nation in the world and throughout his reign the Empire expanded to its ever greatest extent.

George was quick to prove himself of being a decent and popular monarch. He became a symbol of British resistance during the First World War in which he,and his wife visited the war front regulary. However, at home his popularity was waining with even H.G Wells reffering to him as "an alien" because of his German background (his grandfather Prince Albert was German). Growing increasingly worried he changed the family name to “Windsor" to remove any association with a German heritage. He was seriously injured when thrown by his horse at a troop review in France.

As the war came to a close many world monarchy's were abolished or diminished, yet under the reign of George V the monarchy remained very much firmly established and as popular with the ordinary public as his late father. He worked hard as King, visitng many places and meeting many people, from world leaders to working class miners. The King also made friendly relations with socialist Labour party politicians and trade union members. The King, if anything was ahead of his ministers and understood the Empire better. He advised the government during the General Strike of 1926 not to take a hard line against the protestor stating "Try living on their wages before you judge them." Again, unlike most minister's George became concerned by the rise of Adolf Hitler and the Nazis. He warned that within ten years there would be yet another world war and told many to be suspicious of the Nazis. He was correct with war in fact breaking out just three years after his death. 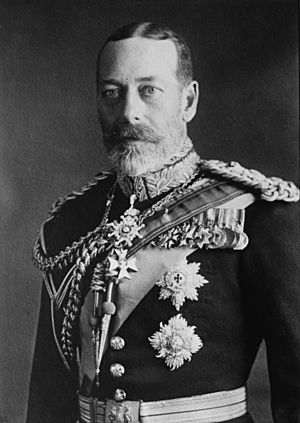 Among other things, he is also credited for starting the Royal Christmas Broadcast tradition in 1932. His Silver Jubilee in 1935 was greeted with jubilations and was a very well loved king across all classes of society. Afterwards however his health suddenely declined. In was in these later years when George's relationship with his eldest son and heir, Edward, deteriorated. George was cross with Edward's failure to settle down in life and was angered and appalled by his many affairs with married women. Edward did not take royal duties seriously, and although quite popular preferred spening time partying and luxury- bringing him into direct conflict with George's sense of duty and hard work. George said of his son Edward: "After I am dead, the boy will ruin himself within 12 months", indeed he was correct as less than a year after taking the throne, Edward abdicated and caused the family great damage. George V was regarded as a very wise King with very good judgement.

Seriously ill, on the evening of 15 January 1936, the King took to his bedroom at Sandringham House feeling unwell; he died on the 20th January. He was 70 years old. He lay in Westminster Hall before his state funeral. A night previous all his surviving sons mounted guard, known as the Vigil of the Princes as a mark of deep respect. Statues of King George V were erected across the world and has been portayed numerous time by actors.

It was not known until recently that he had been deliberately euthanized by his chief physician, Lord Dawson of Penn. Dawson issued a bulletin with words that became famous: "The King's life is moving peacefully towards its close". Dawson's private diary, unearthed after his death and made public in 1986, reveals that the King's last words, a mumbled "God damn you!", were addressed to his nurse when she gave him a sedative on the night of 20 January. Dawson wrote that he hastened the King's death. Dawson noted that he acted to preserve the King's dignity, to prevent further strain on the family, and so that the King's death at 11:55 p.m. could be announced in the morning edition of The Times newspaper rather than "less appropriate ... evening journals".

This account, revealed in 1986, caused great astonishment. Euthanasia was completely illegal in Britain at the time of Dawson's action.

HM King George V had many titles from his birth to his death. His titles were:

All content from Kiddle encyclopedia articles (including the article images and facts) can be freely used under Attribution-ShareAlike license, unless stated otherwise. Cite this article:
George V of the United Kingdom Facts for Kids. Kiddle Encyclopedia.