Emperor of India facts for kids 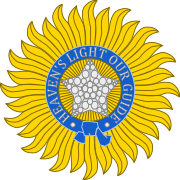 The Star of the Order of the Star of India, used as a badge of British Imperial India

Emperor/Empress of India (Badishah-e-Hind in Hindustani) was used as a title by the last Mughal emperor Bahadur Shah II, and also by the colonial British monarchs during the British Raj in India.

Sometimes, the term "Emperor of India" is also used to refer to Indian emperors such as Ashoka the Great of theMaurya Dynasty and Emperor Akbar of the Mughal empire . However, they did not claim this title for themselves.

The Mughal Empire at its greatest extent (1700).

Although the Mughal dynasty ruled over most of the Indian subcontinent from the 16th century onwards, they simply used the title badshah (considered in the West to be the same as emperor). However dring the Indian rebellion of 1857 against the British, the rebel sepoys seized Delhi and called the Mughal Bahadur Shah II as Badshah-i Hind, or Emperor of India. After the Brtish defeated the rebels, he was captured and was forced to live in Rangoon, Burma in 1858, this ended the rule of the Mughals. 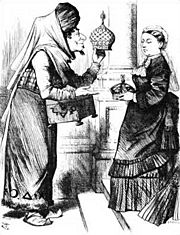 New Crowns for Old depicts Disraeli as Abanazer from the pantomime version of Aladdin offering Victoria an imperial crown in exchange for a royal one.

After the Mughal Emperor ended by the British East India Company, the title "Empress of India" was taken by Queen Victoria from May 1 1876.

Prime Minister Benjamin Disraeli is usually credited with creating the title for her. Also, the title was created when it became evident that Queen Victoria's daughter, Victoria, Princess Royal, would become an empress when her husband ascended the German imperial throne, many people thought it was wrong for the daughter to be an empress while her mother was just a Queen.

When Victoria died, and her son Edward VII ascended the throne, his title became "Emperor of India". The title continued until India and Pakistan became independent from the United Kingdom at midnight on 14/15 August 1947.

King of India and Pakistan

All content from Kiddle encyclopedia articles (including the article images and facts) can be freely used under Attribution-ShareAlike license, unless stated otherwise. Cite this article:
Emperor of India Facts for Kids. Kiddle Encyclopedia.