Akbar the Great facts for kids 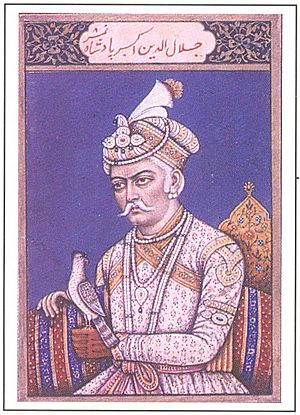 Akbar became the de jure king in 1556 at the age of 13 when his father died. Bairam Khan was appointed as Akbar's regent and chief army commander. Soon after coming to power Akbar defeated Himu, the general of the Afghan forces, in the Second Battle of Panipat. After a few years, he ended the regency of Bairam Khan and took charge of the kingdom. He initially offered friendship to the Rajputs. However, he had to fight against some Rajputs who opposed him. In 1576 he defeated Maha Rana Pratap of Mewar in the Battle of Haldighati. Akbar's wars made the Mughal empire more than twice as big as it had been before, covering most of the Indian subcontinent except the south. 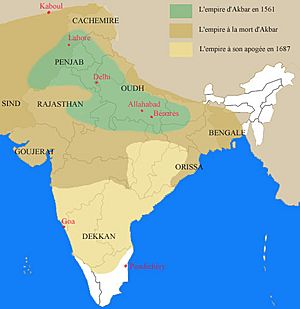 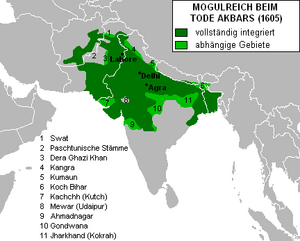 Akbar's system of central government was based on the system that had evolved since the Delhi Sultanate, but the functions of various departments were reorganised with detailed regulations for their functioning

Akbar was a Muslim. He realized that to establish a strong empire, he had to gain the confidence of his Hindu people who were the majority in India.

Din-i-ilahi was a religious path suggested by Akbar. It was a code of moral conduct which reflected Akbar's secular ideas and he desire to achieve peace, unity, tolerance in his empire. Belief in one god, worship of source of light, non-killing of animals, Having peace with all were some features of Din-i-ilahi. It didn't have any rituals, holy books, temples or priests.

Male circumcision was not to be done before the boy was 12 years old, and after that it was optional. It was a Jewish custom adopted by Islam. Akbar's rule was that it should be made optional and should be done, if at all, at an age when boys could understand what it was. He was a very good emperor and he had a sense of justice.

When he was at Fatehpur Sikri, he held discussions as he loved to know about others' religious beliefs. On one such day, he got to know that the religious people of other religions were often bigots (intolerant of others religious beliefs). This led him to form the idea of the new religion, Sulh-e-kul meaning universal peace. His idea of this religion did not discriminate other religions and focused on the ideas of peace, unity and tolerance. This gesture of his made the Hindus and people of other religions call him with different names and start loving him.

Akbar's reign was chronicled by his court historian Abul Fazal in the books Akbarnama and Ain-i-Akbari. Other sources of Akbar's reign include the wod Sirhindi. Akbar was an artisan, warrior, artist, armourer, administrator carpenter, emperor, general, inventor, animal trainer, technologist. He became emperor at the age of 18.

The Akbarnāma means the Book of Akbar. It is the official biographical account of Akbar written by Abu Fazal. It includes vivid and detailed descriptions of his life and times. It also includes the information about the flora, fauna, life of the people of his reign, and the places Akbar used to visit.

The work was commissioned by Akbar, and written by Abul Fazl, one of the Navratnas (Nine Jewels) of Akbar's royal court. The book took seven years to complete. An illustration was done in the Mughal school of painting. A part of this is Ain-i-Akbari.

On 3 October 1605, Akbar fell ill with an attack of dysentery, from which he never recovered. Twelve days after his sixty third year he died on 27 October 1605, after which his body was buried at a mausoleum in Sikandra (Agra): Akbar's tomb.

All content from Kiddle encyclopedia articles (including the article images and facts) can be freely used under Attribution-ShareAlike license, unless stated otherwise. Cite this article:
Akbar the Great Facts for Kids. Kiddle Encyclopedia.