Mirza Nur-ud-din Beig Mohammad Khan Salim, known by his imperial name Jahangir (31 August 1569 – 28 October 1627), was the fourth Mughal Emperor who ruled from 1605 until his death in 1627. Much romance has gathered around his name (in Persian, Jahangir means 'conqueror of the world', 'world-conqueror' or 'world-seizer', and the tale of his relationship with the Mughal courtesan, Anarkali, has been widely adapted into the literature, art and cinema of India.

Salim was made a Mansabdar of ten thousand (Das-Hazari), the highest military rank of the empire, after the emperor. He independently commanded a regiment in the Kabul campaign of 1581, when he was barely twelve. His Mansab was raised to Twelve Thousand, in 1585.

Jahangir was fascinated with art and architecture, he stated his skills at being able to determine the artist of any portrait by simply looking at a painting. He also preserved paintings of Emperor Akbar's period.

Jahangir took his connoisseur-ship of art very seriously. Paintings created under his reign were closely catalogued, dated and even signed, providing scholars with fairly accurate ideas as to when and in what context many of the pieces were created, in addition to their aesthetic qualities.

Jahangir was notable for his pride in the ability of his court painters. A classic example of this is described in Sir Thomas Roe's diaries, in which the Emperor had his painters copy a European miniature several times creating a total of five miniatures. Jahangir then challenged Roe to pick out the original from the copies, a feat Sir Thomas Roe could not do, to the delight of Jahangir.

Jahangir was also revolutionary in his adaptation of European styles. A collection at the British Museum in London contains seventy-four drawings of Indian portraits dating from the time of Jahangir, including a portrait of the emperor himself. These portraits are a unique example of art during Jahangir's reign because before and for sometime after, faces were not drawn full, head-on and including the shoulders as well as the head as these drawings are. 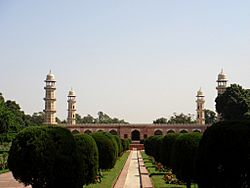 The Tomb of Jahangir in Shahdara, Lahore

Jahangir was trying to restore his health by visiting Kashmir and Kabul. He decided to return to Lahore on account of a severe cold. Jahangir died on the way back from Kashmir near Sarai Saadabad in 1627.

His body was transferred to Lahore to be buried in Shahdara Bagh, a suburb of Lahore, Punjab. He was succeeded by his third son, Prince Khurram, who took the title of Shah Jahan. Jahangir's elegant mausoleum is located in the Shahdara locale of Lahore and is a popular tourist attraction.

All content from Kiddle encyclopedia articles (including the article images and facts) can be freely used under Attribution-ShareAlike license, unless stated otherwise. Cite this article:
Jahangir Facts for Kids. Kiddle Encyclopedia.