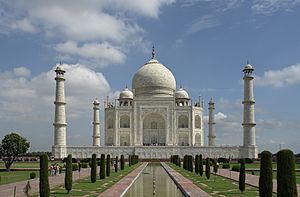 The Taj Mahal is in Agra

Agra is a city in the northern state of Uttar Pradesh, India. The city is famous for being the capital of the Mughal emperors from 1526 to 1658. It is a major tourist destination for its many Mughal-era buildings such as Tāj Mahal, Agra Fort and Fatehpūr Sikrī, all three of which are UNESCO World Heritage Sites.

Agra is on the Indo-Gangetic plain and has a continental climate, with long, hot summers from April to September. During summers dry winds blow in this region. The monsoon months from July to September see about 69 cm of rainfall annually. Winters are from November to February. Agra is best visited in the months of October, November, February and March, when the average temperature are between 16 and 25 Celsius.

Agra has a rich history, seen in the monuments around the city. Though the heritage of Agra city is linked with the Mughal dynasty, many other rulers also contributed to the rich past of this city. Modern Agra was founded by Sikandar Lodhi (Lodhi dynasty; Delhi Sultanate) in the 16th century. Babar (founder of the Mughal dynasty) also stayed for sometime in Agra and introduced the concept of square Persian-styled gardens here. Emperor Akbar built the Agra Fort and Fatehpur Sikri near Agra. Fatehpur Sikri remained his capital for around fifteen years after which the city was left isolated in mysterious circumstances. Jahangir beautified Agra with palaces and gardens despite spending most of his time in Kashmir.

Agra‘s greatest time came when Shahjahan ascended to the throne of Mughal Empire. He marked the greatest point of Mughal architecture. He built the Taj Mahal in memory of his favourite wife Mumtaz Mahal. In his later years, Shahjahan shifted his capital to the new city of Shahjahanabad(Delhi) and ruled from there. Shahjahan was removed in 1658 by his son, Aurangzeb who kept him as prisoner in the Agra Fort. Aurangzeb shifted the capital back to Agra before his death. After the death of Aurangzeb, Mughal Empire could not reach its peak and many regional kingdoms emerged. The post-Mughal era of Agra saw the rule of the Jats, Marathas and finally the British taking over the city. After British Raj ended, Agra became part of independent India.

Auto Rickshaw and Cycle Rickshaw are the main transportations in Agra and are available all around the city.

There are City buses but they are infrequent.

Polluting vehicles are not allowed near Taj Mahal, so one needs to take electric Autos or Tanga(Tonga) from a few kilometers outside the Taj Mahal. 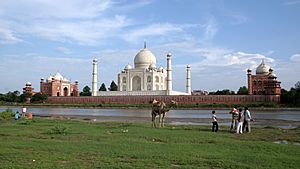 Agra's Taj Mahal is one of the most famous buildings in the world. It is well known for its reason to be built for Shah Jahan's favorite wife, Mumtaz Mahal. It is one of the New Seven Wonders of the world, and one of three World Heritage Sites in Agra.

Completed in 1653, the Tāj Mahal was built by the Mughal king Shāh Jahān as the grave for his beloved wife, Mumtāz Mahal. It was built in white marble. It is perhaps India's most fascinating and beautiful monument. This perfectly symmetrical monument took 22 years (1630-1652) of hard labour and 20,000 workers, masons and jewellers to build. Along with the building there is landscaped gardens. The architect who built the monument is named Persian architect, Ustād 'Īsā. The Tāj Mahal is located on the bank of the Yamuna River which can be observed from Agra Fort.

Agra Fort and Fatehpur sikri are some other noteworthy places of interest.

All content from Kiddle encyclopedia articles (including the article images and facts) can be freely used under Attribution-ShareAlike license, unless stated otherwise. Cite this article:
Agra Facts for Kids. Kiddle Encyclopedia.