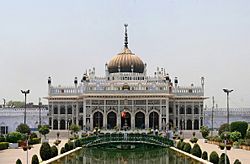 Chhota Imambara is a monument in Lucknow, India. It was built by Muhammad Ali Shah, The third Nawab of Avadh in 1838, to serve as his mausoleum. It is now a tourist attraction.

Lucknow is the capital city of the north Indian state of Uttar Pradesh. This metro city is the administrative headquarters of Lucknow District and Lucknow Division. Lucknow has always been known as a multicultural city and flourished as a cultural and artistic capital of North India in the 18th and 19th centuries. Today it continues as an important centre of commerce, aerospace, finance pharmaceuticals, technology, design, culture, tourism, music and poetry. Lucknow ranked 6th among all the cities in India for fastest job-creation.

All content from Kiddle encyclopedia articles (including the article images and facts) can be freely used under Attribution-ShareAlike license, unless stated otherwise. Cite this article:
Lucknow Facts for Kids. Kiddle Encyclopedia.