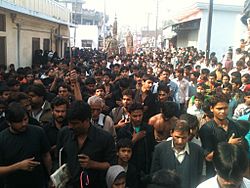 Azadari procession carried out by Shiite Muslims in Indian city of Hardoi on the Day of Ashura.

Muharram is held to be the most sacred of all the months, except for Ramadan. Some Muslims fast during these days. The tenth day of Muharram is the Day of Ashura. To Shia Muslims it is part of the Mourning of Muharram.

Many Sunni Muslims fast during this day. It is in the hadith that Musa (Moses) and his people had a victory over the Egyptian Pharaoh on the 10th day of Muharram. The Islamic prophet Muhammad asked Muslims to fast on this day, and also a day extra either before or after. Many Muslims cook something sweet like sweet rice and share with their family and circle of friends to eat when breaking their fast.

All content from Kiddle encyclopedia articles (including the article images and facts) can be freely used under Attribution-ShareAlike license, unless stated otherwise. Cite this article:
Muharram Facts for Kids. Kiddle Encyclopedia.