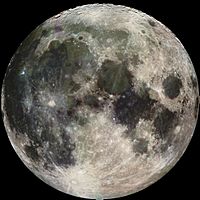 A lunar calendar is a calendar that is based on the phases of the Moon. Because there are slightly more than twelve lunar months (29.53 days each) in a solar year, the period of 12 lunar months (354.37 days) is sometimes referred to as a lunar year.

A common purely lunar calendar is the Islamic calendar. It is calculated from one crescent moon to the next crescent moon. A feature of the Islamic calendar is that a year is always 12 months. So the months are not linked with the seasons. They drift each solar year by 11 to 12 days. It comes back to the position it had in relation to the solar year approximately every 33 Islamic years. It is used mainly for religious purposes, but in Saudi Arabia it is the official calendar. Other lunar calendars often include extra months added occasionally to synchronize it with the solar calendar.

The oldest known lunar calendar was found in Scotland. It dates back to around 8,000 BC.

All content from Kiddle encyclopedia articles (including the article images and facts) can be freely used under Attribution-ShareAlike license, unless stated otherwise. Cite this article:
Lunar calendar Facts for Kids. Kiddle Encyclopedia.