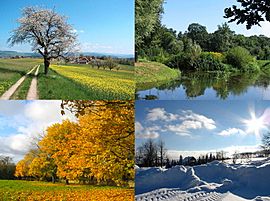 A season is a part of a year. In most areas of the world there are four seasons in a year: spring, summer, autumn (British English) or fall (US English), and winter.

In some areas there are a different number of seasons. For example, in the tropical parts of Australia (in the northern parts of Queensland, Western Australia and the Northern Territory), wet and dry seasons are also observed. These are in addition to, or replace the regular season names.

In places which are tropical and subtropical, there are two seasons: the rainy (or wet, or monsoon) season and the dry season. This is because the rain changes more than the temperature.

Summer is a warm season because the days are longer and the Sun is high in the sky, giving direct light to the ground. Winter is a cold season because the days are shorter and the Sun is low in the sky, giving indirect light to the ground. Both the changes in the length of the day and the height of the Sun at noon are caused by the tilt of the Earth's spin axis with respect to the plane of the Earth's path around the Sun. At any time, in any season, the northern and southern hemispheres (halves of the Earth) have opposite seasons.

Animation of seasonal differences especially snow cover through the year

Meteorological seasons are reckoned by temperature, with summer being the hottest quarter of the year and winter the coldest quarter of the year. In 1780 the Societas Meteorologica Palatina (which became defunct in 1795), an early international organization for meteorology, defined seasons as groupings of three whole months as identified by the Gregorian calendar. Ever since, professional meteorologists all over the world have used this definition.

In Australasia the meteorological terms for seasons apply to the temperate zone that occupies all of New Zealand, New South Wales, Victoria, Tasmania, the south-eastern corner of South Australia and the south-west of Western Australia, and the south east Queensland areas south of Brisbane.

In Great Britain, the onset of spring used to be defined as when the maximum daily temperature reached 50 °F (10 °C) in a defined sequence of days. This almost always occurred in March. However, with global warming this temperature is now not uncommon in the winter.

All content from Kiddle encyclopedia articles (including the article images and facts) can be freely used under Attribution-ShareAlike license, unless stated otherwise. Cite this article:
Season Facts for Kids. Kiddle Encyclopedia.