Flooding of the Nile facts for kids 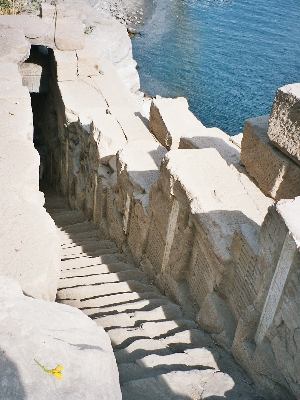 Nilometer on Elephantine Island near Aswan

Before the Aswan Dam was built (1898-1902). there was a Nile flood, once a year. This flood carried rich sediments, which made the soil fertile. Egypt is located in the desert, and agriculture is only possible close to the Nile. A rainy season in Ethiopia starts the flooding, which used to occur between May and August. During this time, the Blue Nile has five times as much water as the White Nile. During the rest of the year, the White Nile has almost twice as much water than the Blue Nile. This event was visible in Aswan, starting in June, and reaching its peak in August. The water reaches the eastuary of the Nile about two weeks later.

The flooding always occurs at the same time; in some years it may be a few days erlier, in others it will be a few days later. What cannot be prediced is the total amount of water. Little water meant droughts and famine. Too much water would cause damage to dams and houses.

All content from Kiddle encyclopedia articles (including the article images and facts) can be freely used under Attribution-ShareAlike license, unless stated otherwise. Cite this article:
Flooding of the Nile Facts for Kids. Kiddle Encyclopedia.