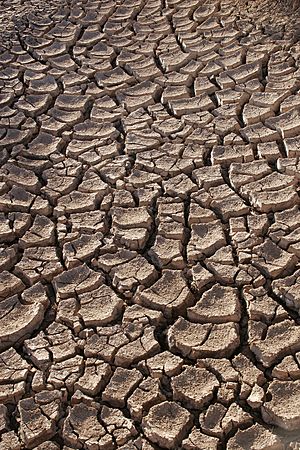 Dry earth as a result of a drought in the Sonoran Desert, Mexico

Drought is a continuous period of dry weather when an area gets less than its normal amount of rain. Droughts can last months or even years. Because crops and other plants need water to grow and land animals need water to live, droughts can be dangerous. Because of the lack of water, famine occurs and sometimes deserts are created. Many people die every year in famines that are due to drought in subsistence farming areas. Sometimes conflicts can occur because of drought.

A drought is a natural event that is caused by other weather events like El Niño, high pressure systems, and global warming. Drought can be triggered by people as well. Deforestation (people cutting down trees in forests and not replanting more trees), diverting (redirecting) rivers, and emptying lakes are ways that man interferes with nature and can cause drought.

It is often difficult to determine a specific time when a drought started because a drought is a disaster that usually takes place slowly. Its effects often build up slowly over a long time and may last from months to years, even after rain resumes.

Water can fall in three ways from the sky:

Droughts occur mainly in areas where the normal levels of rainfall are already low. If it rains a little less than normal over time, a drought will happen. Wind can also be one of the factors in a drought when there is already a lack of rain. If a dry wind blows (like a wind from over the land) rather than a more humid wind (like a wind from over the ocean), it can dry the land faster. 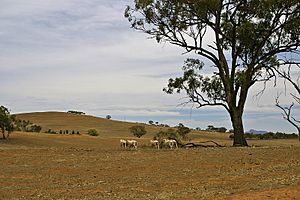 In the tropics (the areas of the earth that are closest to the equator), there are distinct wet and dry seasons. During the wet seasons, the area becomes a Monsoon trough because monsoons are pulled into the movement of air. During the dry seasons, the Intertropical Convergence Zone (Monsoon trough) moves dry air through the tropics. The movement of dry air eventually causes watering holes and rivers to dry up. This means that many grazing animals like zebras, elephants, and wildebeest are faced with a choice: move (migrate) to where there is water or die. The fruit and vegetable-bearing plants that are left ripen faster because evaporation and transpiration from the plants are increased. Bushfires are common during the dry season as well because of the lack of water in the remaining plants. 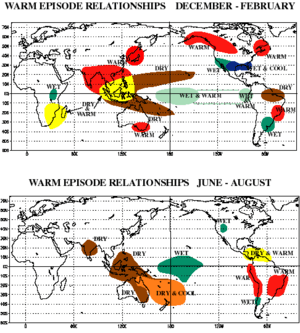 El Niño is a natural event that takes place when seawater temperature rises in the tropical Pacific Ocean. This changes the atmospheric pressure between the Pacific and Indian Oceans. Since atmospheric pressure determines weather, during El Niño we see drought in some areas of the world and heavy rainfall in other areas. 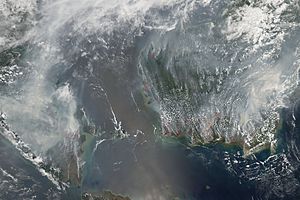 Fires on Borneo and Sumatra, 2006. People use slash-and-burn deforestation to clear land for agriculture.

Erosion is a process in which natural forces like wind, air, water, and gravity cause the earth to move or wear away. In dry, or arid, climates, the main source of erosion is the wind. Because the soil is already dry, wind can lift small particles and move them to another region. Particles that are suspended in the wind may rub against solid objects and cause erosion by abrasion. Wind erosion usually happens in areas where there is not enough rainfall to grow many plants.

Loess is a type of soil that is affected by wind erosion. It looks like little cliffs of sand and is common in the middle of the United States and other areas of the world like China, Hungary, and Belgium. Windbreaks (like large trees and bushes) are planted on and near loess to help block as much wind as possible.

Scientists expect that because of global climate change, droughts will be triggered. Overall, they state that global warming will result in more rain falling all over the world, but areas that are prone to drought will increase as well. Some of the suggestions to fight global warming, however, involve the use of a space sunshade, which may also increase the chances of drought.

As drought continues, the conditions surrounding it gradually worsen and those living in drought areas are more affected. People define droughts in three main ways: A Mongolian gazelle dead due to drought.

The consequences of droughts and water shortages can be divided into three groups:

Drought is a normal part of the cycle of the climate in most parts of the world. It is written about in the Epic of Gilgamesh and the Biblical story of Joseph. Historians believe that people migrated out of Chile and Africa thousands of years ago because of drought. 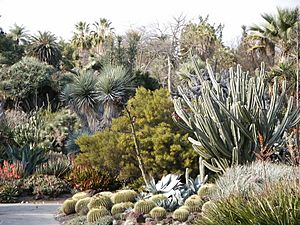 Succulent plants are well-adapted to survive long periods of drought. 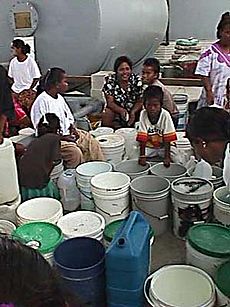 Farmers can lessen the effects of (mitigate) drought by properly watering and rotating their crops. Agencies have been formed to focus on soil preservation. This began in 1935 after President Roosevelt signed documents creating the Soil Conservation Service. The name has since been changed to the Natural Resources Conservation Service.

Here is a list of ways that we can protect against drought, lessen the effects of drought, and bring relief to those who are affected by drought:

All content from Kiddle encyclopedia articles (including the article images and facts) can be freely used under Attribution-ShareAlike license, unless stated otherwise. Cite this article:
Drought Facts for Kids. Kiddle Encyclopedia.