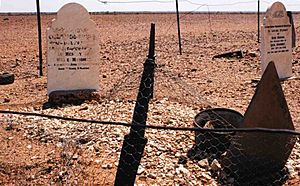 Farina is a locality in the Australian state of South Australia. At the 2006 census, Farina had a population of 55.

On the edge of the desert, it sits within the Lake Eyre Basin and it is situated on the old alignment of the Ghan railway, 26 kilometres (16 mi) north of Lyndhurst and 55 kilometres (34 mi) south of Marree where the Oodnadatta Track and the Birdsville Track commence. 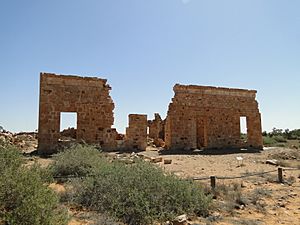 Ruins of the Exchange Hotel, Farina

Originally called The Gums or Government Gums, Farina was settled in 1878 by optimistic farmers hoping that rain follows the plough. The town was the railhead for a time until 1884 before the railway was extended to Marree. During the wet years of the 1880s, plans were laid out for a town with 432 ¼-acre blocks. It was believed that it would be good for growing wheat and barley, however normal rainfall is nowhere near enough to grow these crops. Several silver and copper mines were dug in the surrounding area.

Farina grew to reach a peak population of approximately 600 in the late 1800s. In its heyday, the town had two hotels (the Transcontinental and the Exchange) and an underground bakery, a bank, two breweries, a general store, an Anglican church, five blacksmiths and a school. In 1909, 1,143 kilograms (2,520 lb) iron meteorite was discovered north-east of the town.

The town is no longer inhabited, with the closest residents now living at Farina station, visible to the west of the town. A bush camping area is maintained by the owners of Farina station.

In 2008 Farina Restoration Group was formed, and in May 2009, 30 people attended a 14-day restoration program at Farina.

Volunteer efforts have been made to restore the town, including the repair of the bakery and the addition of informational signs.

The town's cemetery is located a few kilometres away via a signposted track. Of interest is the Afghan corner of the cemetery which contains several headstones with both English and Arabic inscriptions, plus several headstones without inscriptions, marking the resting place of former Farina residents of Afghan origin who were involved in or connected to the Afghan camel trains which used to provide transport services before the railway was extended. All the gravestones face Mecca in the Islamic tradition.

During World War I, 33 men who were born in Farina enlisted for the duration of the war and for four months after its end. All of them were volunteers. The first man enlisted at Helena Vale in South Australia[where?] on 28 August 1914 and joined the 11th Battalion. The last man enlisted on the 23 March 1918.

Of the 33 men who went to war from Farina, 5 were killed in action, 10 were wounded and one died at sea, en route to England.

The last survivors were discharged on 16 August 1920. 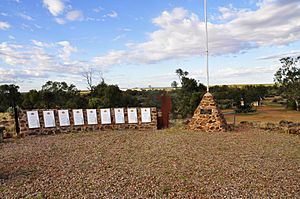 During World War II, 35 men born in Farina enlisted. Of those, nine served in the Royal Australian Air Force. The first man enlisted on 18 October 1939 and the last man in 15 March 1945. The youngest was 18 when he enlisted and the oldest was 45. Three men were killed in action and a fourth died during his service in the army. The last Farina man was discharged in October 1948.

All content from Kiddle encyclopedia articles (including the article images and facts) can be freely used under Attribution-ShareAlike license, unless stated otherwise. Cite this article:
Farina, South Australia Facts for Kids. Kiddle Encyclopedia.