The Far North is a large region of South Australia close to the Northern Territory border. Colloquial usage of the term in South Australia refers to that part of South Australia north of a line roughly from Ceduna through Port Augusta to Broken Hill. The South Australian Government defines the Far North region similarly with the exception of the Maralinga Tjarutja Lands. the Yalata Aboriginal community and other unincorporated crown lands in the state's far west, which are officially considered part of the Eyre and Western region.

The region is both the largest and also the least populated of the state. The Far North is also known as the Arid Lands of South Australia as much of the region is desert. 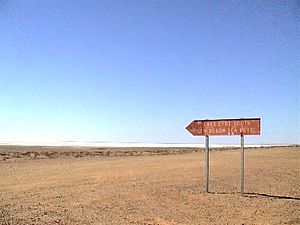 A roadside sign on the Oodnadatta Track pointing to Lake Eyre. The desert terrain is typical of much of the Far North region.

The deserts in the north east are the Simpson Desert, Tirari Desert, Painted Desert and the Pedirka Desert. To the north and north west the Great Victoria Desert predominates the landscape.

The region has scattered tourist attractions and facilities as well as national parks and reserves.

Some significant roads in the area include the Stuart Highway from Port Augusta to Alice Springs, the Oodnadatta Track, and both the Birdsville Track and the Strzelecki Track to Queensland

All content from Kiddle encyclopedia articles (including the article images and facts) can be freely used under Attribution-ShareAlike license, unless stated otherwise. Cite this article:
Far North (South Australia) Facts for Kids. Kiddle Encyclopedia.