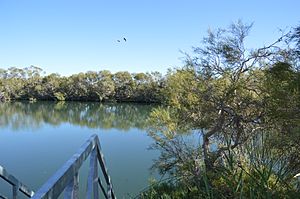 Dalhousie Springs is a group of over 60 natural artesian springs located in Witjira National Park on the western fringe of the Simpson Desert, 180 kilometres northeast of Oodnadatta in northern South Australia. The water temperatures in the springs range from 38 to 43 degrees Celsius. The water is highly mineralised but drinkable (barely). Dalhousie Springs is a popular starting point for crossing the Simpson Desert eastwards to Birdsville in Queensland (around 600 kilometres).

There are a number of unique species of fish that live in the waters around Dalhousie Springs, such as the Dalhousie catfish (Neosilurus gloveri), the Dalhousie hardyhead (Craterocephalus dalhousiensis) and the Dalhousie goby (Chlamydogobius gloveri).

Witjira-Dalhousie Springs was added to the Australian National Heritage List in August 2009.

All content from Kiddle encyclopedia articles (including the article images and facts) can be freely used under Attribution-ShareAlike license, unless stated otherwise. Cite this article:
Dalhousie Springs Facts for Kids. Kiddle Encyclopedia.