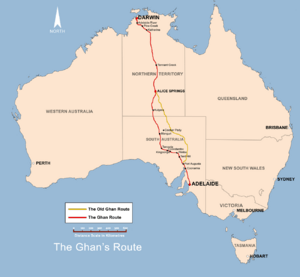 The Adelaide-Darwin railway follows the route of the Telegraph Line, using the easternmost (yellow) path. The railway reached Alice Springs on 6 August 1929, and Darwin in 2003. 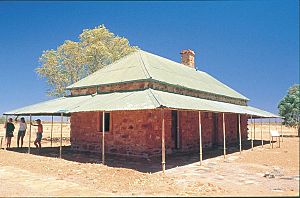 The Australian Overland Telegraph Line was a 3200 km telegraph line that joined Darwin with Port Augusta in South Australia. Completed in 1872 the Overland Telegraph Line allowed fast communication between Australia and the rest of the world. It was one of the great engineering feats of 19th century Australia. It followed the route discovered by the explorer John McDouall Stuart in 1862. It was probably the most important milestone in Australia's telegraphic history.

Because of the limits of technology, the telegraph messages could only travel about 300 km along the line. Repeater stations were built at regular intervals so that the messages could be resent. Some of the stations became the start of cities such as Alice Springs or Tennant Creek, while others became forgotten ruins, such as the Peake Repeater Station built near Freeling Springs in South Australia.

All content from Kiddle encyclopedia articles (including the article images and facts) can be freely used under Attribution-ShareAlike license, unless stated otherwise. Cite this article:
Australian Overland Telegraph Line Facts for Kids. Kiddle Encyclopedia.