Kids Encyclopedia Facts
This page is about the city of Albany. For the local government area, see City of Albany. 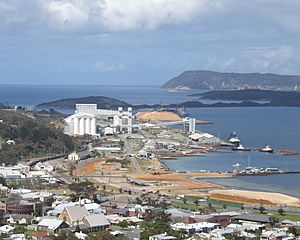 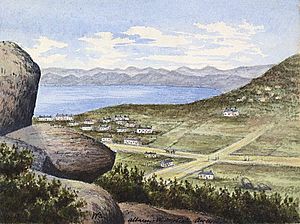 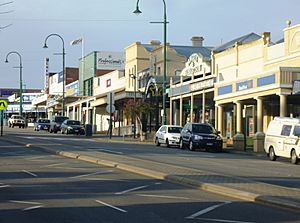 York Street in the centre of Albany 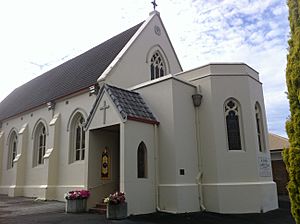 Albany is a port city in the Great Southern region of Western Australia, 418 km SE of Perth, the state capital. Albany is the oldest permanently settled town in Western Australia, predating Perth and Fremantle by over two years. At June 2015, Albany's estimated urban population was 33,970, making it the state's sixth-largest population centre.

The city centre is at the northern edge of Princess Royal Harbour, which is a part of King George Sound. The central business district is bounded by Mount Clarence to the east and Mount Melville to the west. The city is in the local government area of the City of Albany.

Albany was founded on 26 December 1826 as a military outpost of New South Wales as part of a plan to forestall French ambitions in the region. To that end, on 21 January 1827 the commander of the outpost, Major Edmund Lockyer, formally took possession of the western third of the continent for the British Crown.

The area was initially named Frederick Town in honour of Prince Frederick, Duke of York and Albany. In 1831, the settlement was transferred to the control of the Swan River Colony and renamed Albany by Lieutenant-Governor James Stirling.

During the last decade of the 19th century the town served as a gateway to the Eastern Goldfields. For many years, it was the colony's only deep-water port, having a place of eminence on shipping services between Britain and its Australian colonies. The opening of the Fremantle Inner Harbour in 1897, however, saw its importance as a port decline, after which the town's industries turned primarily to agriculture, timber and later, whaling.

Today the town is a significant tourist destination and base from which to explore the south-west of the state, and is well regarded for its natural beauty and preservation of heritage. The town has an important role in the ANZAC legend, being the last port of call for troopships departing Australia in the First World War.

The Albany region was home to the Menang Noongar indigenous people, who made use of the area during the summer months for fishing and other activities. They called the area Kinjarling which means "the place of rain". Many town names in South-Western Australia end in "up" or "ing", which means "place of" in the Noongar language. They would sometimes camp near "Boondie Yokine" – roughly translated as Dog Rock. Early European explorers discovered evidence of fish traps located on Emu Point and on the French, now the Kalgan, River and a small "village" of bark dwellings that were, at the time, deserted.

The following Information is derived from the State Heritage Register where these places are registered. The assessment criteria contain more details. 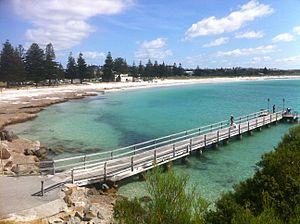 The city centre of Albany is located between the hills of Mount Melville and Mount Clarence, which look down into Princess Royal Harbour. Many beaches surround Albany, with Middleton Beach being the closest to the town centre. Other popular beaches include Frenchman Bay and Muttonbird Island.

Albany is in a sub-region of the Great Southern region of Western Australia. 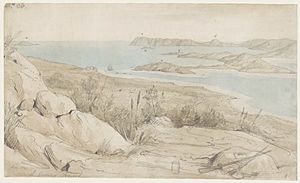 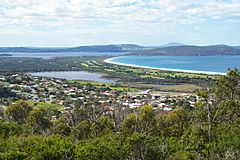 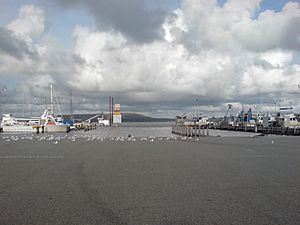 The Albany coastline is notorious for deaths due to king waves washing people off rocks. The Torndirrup National Park features some of the more rugged coastline in the area. However, there are many beaches that are safe and usable:

Albany has a Mediterranean climate (Köppen Csb) with dry, warm summers, mild, wet winters, and pleasant springs and autumns. Summers have short spells of very hot weather, but cool ocean breeze brings relief, especially during evenings and nights. The city is situated on what is promoted as the "Rainbow Coast", an appropriate title given the frequency of days with both sun and drizzle or showers. Albany has 44.8 clear days annually.

Albany received a record amount of rain on 20 November 2008 when violent storms swept across the Great Southern region. The town was flooded after 113.8 mm (4.48 in) of rain fell in a 24-hour period, the highest amount recorded since rainfall records began in 1877. The wettest month on record was June 1920 when 292.8 mm (11.5 in) fell, while February 1877 and February 1879 remain the only rainless months.

Albany has a town bus service run by Love's Bus Service with five town routes. Albany is connected to Perth with road-coach services via Walpole and Bunbury; via Katanning and Northam; via Kojonup and Williams. Transwa coaches also serve Jerramungup, Ravensthorpe and Hopetoun.

Albany was served by the Albany Progress passenger train from Perth until 1978. The railway station reopened as a tourist information centre in 1994.

All content from Kiddle encyclopedia articles (including the article images and facts) can be freely used under Attribution-ShareAlike license, unless stated otherwise. Cite this article:
Albany, Western Australia Facts for Kids. Kiddle Encyclopedia.